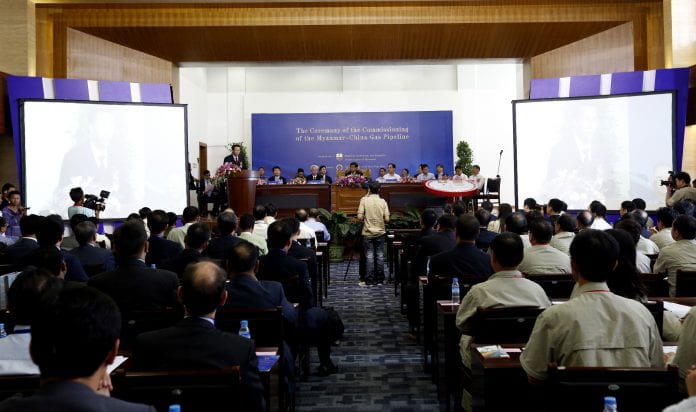 The gas pipeline has a designed annual throughput of 12 billion cubic metres before off-loading in Myanmar.

The crude oil pipeline, which is nearing completion, starts from Made Island and extends onshore for 771km.

The transmission capacity of the crude oil pipeline on the Myanmar side is designed at 22 million tonnes per year with a 300,000-tonne crude oil wharf being added.

After the completion and commissioning of the whole project, 2 million tonnes of crude oil and 20 percent of the designed throughput of gas will be off-loaded in Myanmar.

SEAOP involves China National Petroleum Corporation (CNPC) and Myanmar Oil and Gas Enterprise (MOGE), while the SEAGP involves CNPC of China, Daewoo and KOGAS of South Korea, and OCEBV and GAIL of India.

Responsible official of the SEAOP Jiang Changliang told Xinhua that the areas where the pipeline passes through are featured with complicated terrain and environment, which posed serious challenges to the construction.

After three years of construction work, the gas pipeline on the Myanmar side was completed and underwent test run on May 30.

Vice President U Nyan Tun, Energy Ministers U Than Htay and U Zeya Aung, Chinese Ambassador to Myanmar Yang Houlan and a South Korean representative were present at the commissioning ceremony of the pipeline.