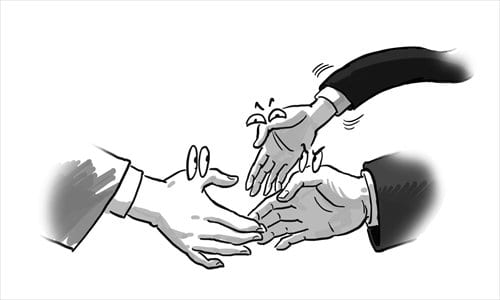 While Chinese enterprises are entering the US “backyard,” Latin America and the Caribbean, one after another and settling down, the US also accelerates its entrance into China’s “backyard.”

Right before US President Barack Obama’s Asia trip, the US Department of State announced it would open its first commercial service office in Myanmar.

It has been widely noticed that the US is back. However, it isn’t back just for a new market. The situation is different from China’s seeking development drives across the world or transferring competitive industries to other countries and regions.

In January, the US embassy in Myanmar provided technological training for 150 civil society activists in Myanmar. And in February, the US funded the social activities of BarCamp, an international network of open online workshops, which has attracted more than 5,000 participants.

These moves have naturally triggered China’s worries, and some media outlets exclaimed that Washington is nosing around China’s backyard.

This is reminiscent of similar arguments from some US media outlets during Chinese President Xi Jinping’s Latin America visit last year that China was entering the backyard of the US.

Certainly, compared with the US, China is still a latecomer and is way behind in terms of soft power. Even with close neighbours like Myanmar, China still faces the challenge of winning more trust from them.

In a recent interview with the Beijing-based Caijing magazine, Elizabeth Economy, director for Asia studies at the Council on Foreign Relations, said that ultimately who would lead Asia would depend on the country’s development route and its diplomatic attitude in wider areas.

According to the historic logic of a great power’s rise and especially when a new order is still lacking in Asia, the fight for leadership may provide more room for speculation about Sino-US conflict.

But will things end differently? Just as a Chinese poem once quoted by Hillary Clinton goes, “After endless mountains and rivers that leave doubt whether there is a path out, suddenly one encounters the shade of a willow, bright flowers and a lovely village.”

If we see each other’s “backyard” as a platform to know more about each other and contribute more to that region, we may find a way to establish a new order in the future.

Take Myanmar. Currently what’s most urgently needed in this country is to boost ethnic reconciliation, without which further realization of democratic politics and stable development will be unlikely.

The stability of northern Myanmar is very important for China, and it is not meaningless for Washington’s promotion of its own human rights values in Myanmar.

This is where the two sides’ interests converge, and cooperation on this point will enhance mutual trust.

So far the US has started to promote some activities facilitating the fostering of civil society, which is helpful for Myanmar’s good governance in the future. However, the arrangement of similar projects should lean more to specific issues of ethnic reconciliation.

China has made some efforts in this regard, such as collaborating and arranging negotiations between the Myanmar government and ethnic minority independent armed forces in northern Myanmar. It needs to consider how to also bring Washington in to promote such negotiations.

If China and the US can strengthen collaboration, communicate on these issues and accumulate experience of cooperation, this will be more important than increasing investment in Myanmar in the short term.

There are more than a few similarly thorny issues in the Asia-Pacific region, especially in China’s neighbourhood. If the two powers can cooperate over these specific issues that concern third parties in this region and influence the peace and stability of the entire area, it will benefit the construction of the future regional order, and will provide a peaceful way out of the fight for future leadership.

China and the US have already established diplomatic mechanisms for Asia-Pacific affairs, and the situation in Myanmar has been on the agenda. Nonetheless, the two should not just exchange information, but also solidly cooperate over specific issues.

The author is a senior editor with People’s Daily. He is now stationed in Brazil.