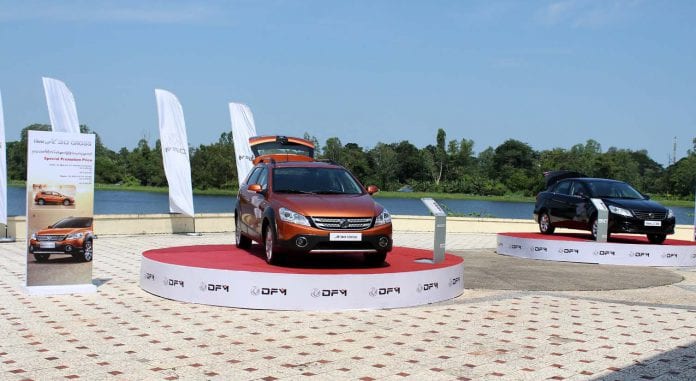 “Nowadays many countries are using Chinese products as they are cheap and the quality is acceptable. Here (in Myanmar) a brand new Japanese-made car with a 1500cc engine costs around K30 or 35 million, but these cars with 1600cc engine will be sold for around K22 million,” U Aung Win, managing director of Yaung Ni Oo Co, said at the launching event of Dongfeng at Inya Lake Hotel in Yangon.

There is an additional K4 million ($4,000) discount for pre-orders. Buyers can secure deals with Ayeyarwaddy Bank and AGD bank to buy the cars in installments.

Pickup trucks and minibuses manufactured by Dongfeng will also be imported along withthe S30 and H 30 Cross series soon, the company said.

Traditionally one of the “Big Three” Chinese automakers, Dongfeng is currently in the top four along with Chang’an Motors, FAW Group, and SAIC Motor.

Counting six global automakers as partners, it has more Sino-foreign joint ventures than any other Chinese carmaker. These partnerships allow it to produce and sell a variety of foreign-branded products in China including those of Citroën, Honda, Kia, Nissan, Peugeot, and Renault.

The company was the second-largest Chinese automaker in 2012 by production volume manufacturing over 2.76 million whole vehicles that year.