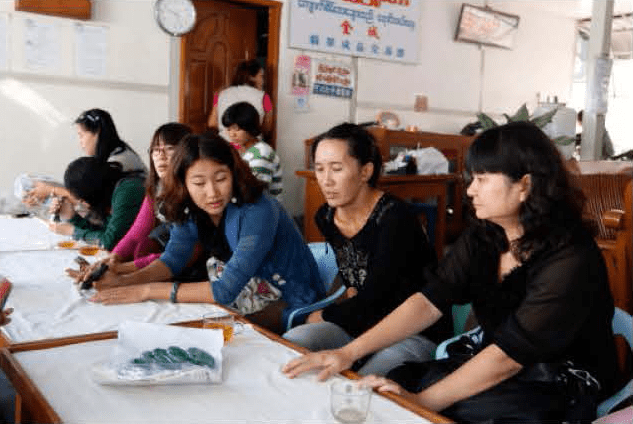 Hong Kong jewellery collector Dennis Sun has been buying jade for three decades. Lately, it has been harder to snag the perfect piece as mainland Chinese buyers drive prices through the roof.

At a Christie’s auction in May, he watched a jadeite ring sell for about HK$20 million ($2.6 million), or five times its estimated price. Last month, he bought a jade bangle for almost HK$1 million even though the colour and quality weren’t all had hoped for.

“The prices went up so high, if I don’t buy it now it’ll only get more expensive later,” he said.

The value of the precious gem is surging with China’s wealthy snapping up jade necklaces, rings and bracelets as long-term investments. They are counting on the stone’s steady ascent to provide safety as Shanghai’s stock market languishes, much of the bond market remains closed to retail investors and even gold prices have plunged.

About 90 percent of the world’s jadeite, the most pre­cious version of the stone, comes from mines in Myanmar. Prices are surging because de­mand is outpacing supply, said Humphrey Yen, an instructor at the Hong Kong Institute of Gemmology.

Even so, buyers “may find it hard to cash out as there is a lack of an internationally recognised market or a price standard for the gemstone,” Yen said.

Without standard interna­tional pricing systems, buyers and sellers rely on subjective valuations by jewellery experts, or use auction bids as a gauge.

“They will have to rely on auc­tion houses to facilitate a trade, or trade it between collectors,” said Yen. “Otherwise, they need to establish connections to jewellers.”

Best known as a green gem, jade comes in colours such as red, yellow, white and lavender. Its price has doubled at auctions over the past five years with more than half of Sotheby’s re­cent jadeite sales coming from Chinese buyers, said Terry Chu, deputy head of Sotheby’s jewel­lery department in Asia.

The Chinese rush for the stone is aiding international auction houses and jewellers such as Chow Tai Fook Jewellery Group Ltd (1929) while providing rev­enue to Myanmar, one of Asia’s poorest nations, which has been opening its economy recently since the military relinquished some control. A jade and gem auction in June fetched over $2 billion for the Southeast Asian nation’s government, which says the Chinese are its biggest customers.

Chinese buyers are still not assured of quick returns.

“Even as you own a top-quality jadeite stone, you can’t simply cash out like you trade your stocks; you must find a buyer who’s willing to pay top money for it,” said Sun, who is also chairman of photography com­pany China-Hong Kong Photo Products Holdings Ltd. “It’s not for speculators or day-traders.”

While jade doesn’t guarantee “big money,” he is hopeful it can protect his wealth against increases in inflation.

Jade has been seen as an imperial stone since the Qing dynasty. Jadeite, called “fei cui” in Mandarin, is believed to ward off evil spirits and symbolises purity and longevity in China. It is cut by hand, said Kent Wong, managing director of Chow Tai Fook, China’s largest jewellery chain.

Jade is a generic term for both jadeite and nephrite, two distinct ornamental stones. The softer nephrite, which is less rare and sourced from parts of China and the Middle East, is used mainly for carving.

As the Chinese have grown wealthier and more sophisti­cated in their tastes, they have favoured jade’s subdued allure over flashier stones. An aus­terity campaign by President Xi Jinping that seeks to curb extravagant official spending is giving the stone an added boost.

Jade is “more discrete” than gold or diamonds and likely to benefit from better demand for less conspicuous products, said Aaron Fischer, an analyst at CLSA Ltd.

Sun, who says he buys as a collector and not as a specula­tor, estimates the value of a necklace he bought some time ago has almost tripled to about HK$100 million.

The stock market in China, where the economy is poised for the weakest expansion since 1990, has fallen 7.2 percent this year. Even global bullion prices have plunged this year, reach­ing $1,180.50 per ounce on June 28 in London, the lowest level in almost three years.

With a limited set of tradition­al investment options, wealthy Chinese have poured money into art and property. Nearby in Hong Kong, investors in search of new investments are snap­ping up taxis and licenses.

While the Chinese have also raised spending on pricey items such as diamonds as incomes have risen, jade holds a special place because of a long cultural tradition.

Sun says his father taught him how to pick out a good piece of jade as a kid, and he loves the gem because its colour is vivid and every piece different.

“By buying jadeite and diamonds, we are essentially buying natural resources, which is a relatively safe long-term investment,” he said. “It will surely beat inflation.”

For Chinese jewellers, gross margins on gold items are in the “mid-teens,” compared with 40 percent to 50 percent on sets with gems such as jade or diamonds, said Fischer, the CLSA analyst.

Chow Tai Fook says that if an investor wishes to sell the gem, it buys from them. The Hong Kong-based company recently sold a jadeite bead necklace for over $1.3 million and expects to keep capitalising on that demand. Managing Director Wong says jade prices have al­most tripled since 2005 and are likely to rise at a compounded rate of 15 percent to 20 percent each year.

One VIP customer recently showed Wong his jade collec­tion. The client, a property de­veloper in Northern China, had built up a set of more than 100 jadeite bangles, each costing at least 1 million yuan ($163,000). His jade, Wong said, was simply “portable wealth.”