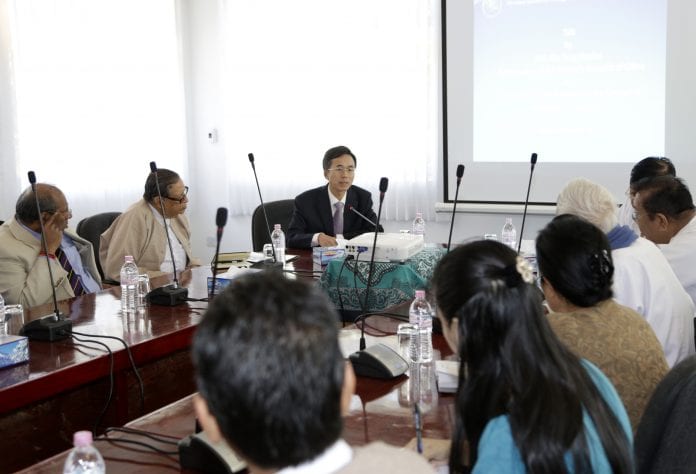 Chinese Ambassador to Myanmar Yang Houlan last week stressed on the development of “paukphaw” (fraternal) friendship and strengthening of win-win cooperation with Myanmar.

Yang made the remarks in his speech at Myanmar Institute for Strategic and International Studies (MISIS) in Yangon.

Speaking on China-Myanmar relations, Yang said mutual benefit and win-win cooperation is the main tone of the relations between the two countries.

Yang rebuffed the reported strain in China-Myanmar relations following the Southeast Asian nation’s unprecedented political and social transformation over the past two years.

Noting that China’s neighbourhood is crucial to its security, development and prosperity, Yang said the new generation of the central leadership of China attaches great importance to the surrounding areas and peripheral diplomacy.

He said China will play an active role in creating a more peaceful, stable and prosperous peripheral environment, and that China will use its economic progress “to benefit the neighbouring countries and achieve common development.”

He said China’s cooperation with Myanmar on hosting the recently-concluded 27th Southeast Asian Games has strengthened the two countries’ relations.

In terms of building China-Myanmar relations, the ambassador raised a four-point proposal: to continuously deepen mutual strategic trust, to continue to expand mutually beneficial cooperation, to further expand people-to-people contact and cultural exchange and to make efforts in strengthening coordination and cooperation international and regional affairs.

Yang said China always supports Myanmar’s efforts to develop friendly and cooperative ties with other nations on the basis of the five “principles of peaceful coexistence,” which were initiated by China, Myanmar and India in 1950s.

“The Chinese side always respect the choice and decision made by the Myanmar people in terms of political system and development path and will not interfere in Myanmar’s internal affairs,” he said.

He claimed that bilateral cooperation in recent years has maintained a good momentum in all fields.

“China wants to see a peaceful, stable and prosperous Myanmar which is in line with the interest of the people of Myanmar, China and other countries in the region,” he said.

With Myanmar’s rising influence in regional affairs and the assumption of ASEAN chairmanship, the cooperative space will continue to be expanded between the two countries, he added.