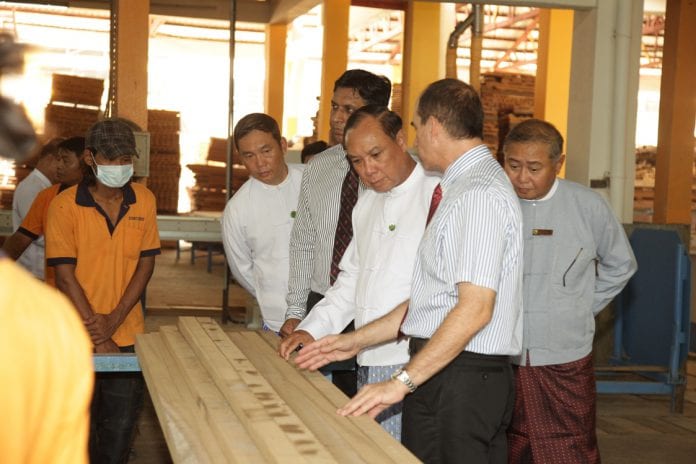 Philippe Maudet, general manager of CIL, said this move from being an FOB player in the teak logs trade flow to investing in processing facilities in Myanmar “would enable CIL to better service the growing demand for traceable and certified lumber in the developed economies.”

The finished wood factory will process about 10,000 tonnes of wood annually, said CIL, which was established as a 100 percent foreign-invested company. The company has employed over 200 staff members and will export its products to the European countries, it said.

“Investing in finished woods factory gives Myanmar a chance to export,” Maudet said. The saw mill investment is a step in the implementation of the company’s strategy to participate with Myanma Timber Enterprise and Myanmar government in promoting growth and development of Myanmar’s certified lumber sector, he said.

Maudet said CIL would be working closely with the Ministry of Environmental Conservation And Forests (MOECAF) on receiving recommendations from international timber organisations after a group of experts including forestry management officials is formed.

At the commissioning of the saw milling facility, U Win Tun, union minister for environmental conservation and forests, said Myanmar wants to establish more timber factories.

License validity for saw mill and plywood as well as for wood-based mills has been extended from one year to five years since 2013, according to the ministry.

“The government encourages wood-based industries because it plans to stop the export of big timber logs,” Than Swe, advisor to CIL, told state-run media.

Government officials said this is a good development for wood-based industries entrepreneurs as Myanmar’s export of value-added products would bring about higher income, technical transfer and more employment opportunities.

Suspension of log export would reduce teak and timber production compared with the past, U Tin Tun, director general of the ministry, told Xinhua news agency.

He said Myanmar’s forest coverage reached 57 percent of the country’s total area between 1980 and 1990, but dropped to 47 percent recently.