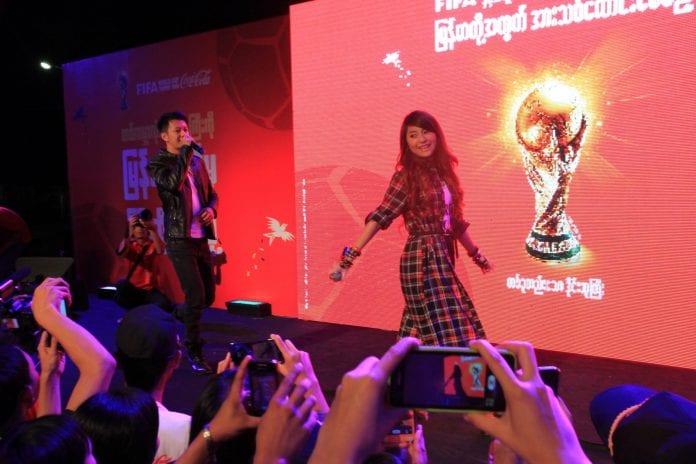 Coca-Cola Myanmar will unleash its “Happiness Journey” program with the launch of the Coca-Cola song for the 2014 FIFA World Cup campaign, “The World is Ours,” featuring Sai Sai and Bobby Soxer.

The Myanmar language version of “The World is Ours,” Coca-Cola’s official song for its FIFA World Cup campaign, will bring together the voices of internationally famous recording artist David Correy, with Coca-Cola ambassadors and Myanmar celebrities Sai Sai and Bobby Soxer.

The local version of “The World Is Ours” will debut in Myanmar during the 2014 Happiness Journey in the lead-up to Thingyan.

“The objective of the localized Coca-Cola song for FIFA World Cup campaign is to highlight the power football has around the world in bringing people and nations together,” says Rommel Fuentebella, director of marketing at Coca-Cola Myanmar.

“We wanted the music of the song to stay very authentic to Brazil, but in an original way that would also resonate with Myanmar audiences and include them in the celebrations and happiness surrounding the FIFA World Cup this summer.”

The original English version of the song was popularised by artist David Correy, who burst onto the international music scene as a finalist on the second season of the reality show, The X Factor.

During Thingyan 2014, the Happiness Journey, a mini-carnival “road-trip”, will be active in both Yangon and Mandalay.

In Yangon, the Happiness Journey will be part of the first-ever Coca-Cola Myanmar Summer Festival 2014 at Myanmar Event Park from 12-16 April. The summer celebration will bring together water activities, adventure games, a foam party, live music, great food and refreshing ice-cold Coca-Cola, the beverage giant said. In addition, an indoor air-conditioned rest area will be available to escape the heat of the hot summer days.