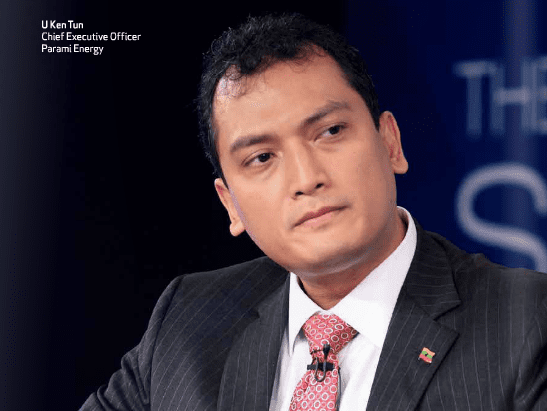 In July, Parami Energy Group was named by the Myanmar Center for Responsible Business (MCRB) as a top socially responsible energy company in the country. The recognition is part of MCRB’s 2014 Transparency in Myanmar Enterprise (TiME) report, which is based on publically available information provided on each company’s website.

This recognition demonstrates that Parami Energy Group is performing on par with established regional peers in terms of transparency and shows that Myanmar companies possess the ability to compete on a grander scale, domestically, regionally and internationally.

According to Parami Energy Group CEO Ken Tun, “We are committed to exceeding the standards of this position and we are striving to be next year’s number one socially responsible business.”

Founded in 2004, Parami Energy Group’s core businesses are in the oil and gas, power, construction, banking and insurance sectors and quickly expanding its company profile into the tourism and event planning sectors.

The company is engaged in multiple partnerships with reputable international companies in new oil and gas exploration, allowing them to leverage cross-border expertise.

According to Tun, the cross-border technology transfer has helped increase Parami Energy Group’s capability and enhances its experience, commitment to excellence and sustainability in Myanmar’s dynamic business environment.

“We believe that we can be a business that makes money, while being professionally confident in what we are doing in our sector and the communities in which we work.”

He said Parami Energy Group believes in being a successful company means helping others to succeed as well.

By many measures, Parami Energy Group is a different kind of company in Myanmar. With a vision to be a national champion, it is one of a handful of companies leading the way in developing internal controls that meet international standards – a rare occurrence in Myanmar and a highly attractive feature to foreign investors.

As Myanmar emerges, with proven and abundant natural resources, the country is under increased scrutiny to comply with international standards in its extractive industries. Often, developing countries rely on their extractives industries as a vehicle for growth and development, but are often criticised in their production methods that are infused with corruption, lack of transparency, and labour law violations. However, Parami Energy seeks to defy these typical characteristics of the energy sector.

Building on the company’s desire to implement internationally recognised standards the company has instituted a “zero-tolerance” policy for corruption, Tun said. Monitored by a compliance officer, Parami Energy Group ensures that each employee is trained to understand all of its policies and expected practices, he added.

Tun said the company has gone through an extensive due diligence process and voluntarily discloses to the public its business partners and the ownership of its subsidiaries, demonstrating its commitment to transparency. The group has said it will be audited by an international accounting firm in 2015 and will provide a summary of results accordingly.

Respect for human rights is also at the top of Parami Energy Group’s commitment to sustainability and social responsibility in its operations, COO Yap Kwong Weng said.

“The company strongly believes businesses should support and protect human rights and ensure that they are not complicit in any human rights abuses.”

Parami Energy Group is one of the few Myanmar companies that have implemented a human rights policy guided by the Universal Declaration of Human Rights, the principles outlined by the Global Dignity Organization, and the United Nations Global Impact Initiative. In accordance with Parami Energy Group’s policy, employees are guaranteed fundamental labour and workers’ rights and have redress with grievances.

“[We are] channelling our energy in the right direction. We are striving to be the most socially responsible company in Myanmar. We want to be a company that makes the best use of resources and works to develop talent within the company,” said Yap.

After decades of international isolation, Myanmar has emerged as a top destination for foreign investment. Global seclusion left the country in severe economic decline and without adequate infrastructure, a population with low levels of human resource capacity, and a broken education system.

But also emerging in the country is a class of businesses committed not only to seeing profits increase, but also engaging communities to support broad based development through corporate social responsibility (CSR) practices.

Understanding the dearth of education and low human resource capacity in Myanmar, Parami Energy Group supports over 1,600 monastery schools in Mandalay, Yangon, Ayeyarwady region, and Shan and Kayin states. The program supports the building of schools and provides financial support for teacher salaries, extracurricular activities and student scholarships. The program aims to raise the basic education level in the country and has already impacted over 5,000 children.

Tun said the group is committed to the economic development of Myanmar and supports SME capacity building initiatives as a means to prepare local businesses for the country’s entry into the ASEAN Economic Community (AEC).

CSR activities in this area include the delivery of targeted workshops meant to educate domestic businesses about the AEC and to assist them in boosting productivity and competitiveness and connecting rural business with supply chains.

The company also boasts being a green company and supports environmental initiatives and has committed to planting 500,000 trees throughout the country by 2015 with over 300,000 trees already planted in Kayin state so far. The firm has also responded to flood and fire victims and is working to increase access to clean drinking water by building wells, and helping medical facilities and schools in developing consistent access to clean water.

The company manages their own corporate social responsibility programs, and does not make financial contributions through third party organisations in order to facilitate greater community impact, he said.