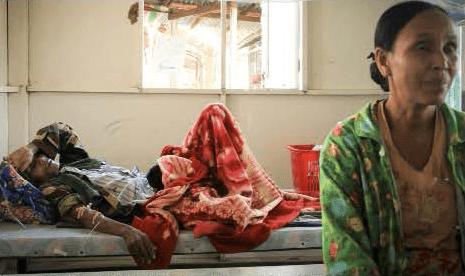 It would be a mild understatement to say that over the last fifty years, healthcare outcomes in Myanmar have not kept pace with those of its neighbours. As the last country in Southeast Asia to open to foreign investment, by 2013 healthcare in Myanmar was suffering badly from over fifty years of neglect. When the World Health Organization (WHO) last ranked Myanmar’s system against its global counterparts, the country was pegged dead last out of 190 countries with respect to what the WHO calls “overall health system performance.” Myanmar spends roughly 2 percent of its GDP on healthcare; impoverished Laos spends 4.5 percent, Cambodia 5.6 percent. Because of the pitiful amount of money the government has historically spent on healthcare, Myanmar continues to struggle with basic problems related to communicable diseases. Malaria is the leading cause of morbidity and mortality in the country. Many of these deaths occur from a drug-resistant form of the disease common along the country’s border with Thailand. TB rates in Myanmar are estimated to be three times the global rate, and the majority of cases are drug-resistant.

The government’s 2013 budget reallocates a significant amount of money away from the military towards improvements in the country’s medical system. There are stakeholders in the Myanmar government who will be resistant not only to additional economic and political reforms, but also attempts to redirect increased tax revenues away from the military towards public goods like healthcare. In 2011, the country’s Minister of Health Yaw Myint rejected a proposal to reform the country’s paltry government-provided healthcare, stating publicly that increases in spending on medical services for the poor were not necessary. Judging by the 2013 budget, Myanmar’s political leadership appears to understand the need to significantly increase spending on the country’s healthcare system. A pressing concern to those familiar with the corruption and dysfunction that characterises Myanmar’s government is how much of the increased spending on healthcare will actually benefit the people.

Aside from concerns over graft, Myanmar lacks any sort of substantial administrative public health capacity. Questions over how new money will get spent, and who makes decisions about what to prioritise spending on, remain unanswered. Given the sheer size and scope of the problems within Myanmar’s health infrastructure, no one at the Ministry of Health has a clear hierarchy of priorities on where money should get directed towards first. The country needs to grow the number of doctors who graduate every year from 1,200 to 1,500. But in a country with limited access to cadavers for medical students, the level of training these new students receive is lacking badly. Those doctors already in practice are badly under-compensated, an easily identified problem to solve but one that requires precious resources. The country’s trauma care capabilities, especially in rural areas, are extremely inadequate. Myanmar has 61 oncologists in the entire country and only three radiation machines in all of Yangon. Cardiovascular diagnostic capabilities barely exist. The point is: against the backdrop of these many different and pressing needs, a clear set of priorities on how to spend limited government resources will be necessary.

Regardless of these concerns, the government’s additional spending on medical goods and services is an important step forward that holds the potential to both improve healthcare in Myanmar, while at the same time creating opportunities for multinationals in healthcare consumer products, pharmaceuticals and medical devices.

The government’s expansion of a national formulary, a group of medicines recommend by the WHO for public hospitals in Myanmar to have available to the public, would increase government spending on pharmaceuticals from its current level of $0.20 per person per year to almost $2.00 per person per year within two years. In addition, as Myanmar’s economy grows and a discretionary income levels follow, the market for consumer OTC healthcare products such as adult mouth care, analgesics, nutritional products, children’s medicines (cough, cold and allergy especially), alongside vitamins and dietary supplements should expand significantly. Between 2011 and 2012, the overall pharmaceutical market in Myanmar grew by almost 19 percent; compounded annual growth rates of 15-20 percent are well within reason for the pharma sector as long as the country’s economy continues to grow.

Currently, the government in Myanmar only accounts for 12 percent of the country’s entire healthcare spending. Even with additional governmentled spending on healthcare, the most important market for MNCs will be that from individual consumers. Today, when a family member in Myanmar needs medical attention, the vast majority will go to a private-pay polyclinic or monastery where for a small fee, they can receive very basic primary care services. If medicine is prescribed, the individual knows they will have to pay 100 percent of the costs out of pocket; even in cases where surgery is required, the doctor will provide a written script with all the required disposable materials used during the procedure. The family must go out and purchase these at a local wholesaler before coming back for the procedure. The net of this is that today’s healthcare consumers in Myanmar are used to taking responsibility for their healthcare decisions. During research completed in March, 47 percent of people in two cities – Yangon and Bago – said their highest preference for improved healthcare was improved quality. Only 29 percent said their most important factor in choosing healthcare was cost. Western brands that can determine how to cost-effectively sell into Myanmar stand to benefit from local consumers who are already sensitive to considerations between cost and quality.

The most challenging question healthcare businesses and investors interested in Myanmar must answer is whether the country is ready for their product or service. While the government’s expanded spending on healthcare is a very bullish signal, healthcare expenditures are largely driven by private-pay. As a result, for the healthcare sector to grow, Myanmar’s economic reforms must continue and the benefits need to accrue to the people in the form of increased personal income and per-capita disposable spending. As Myanmar’s middle class goes from being an aspiration to a reality, the underlying fundamentals that drive success for the healthcare and life science community will follow.