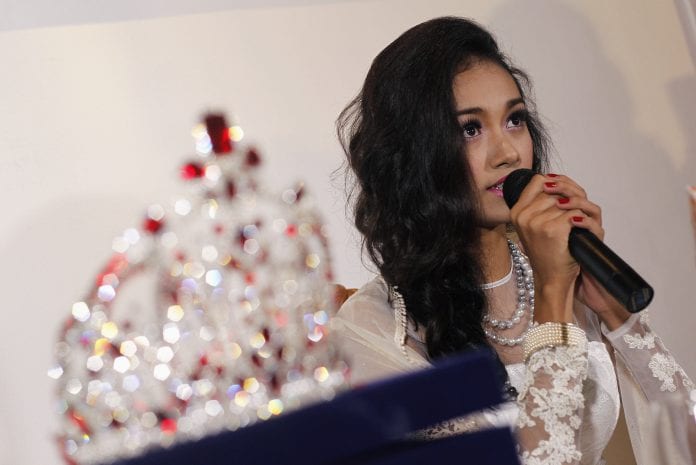 South Korean organisers of the Miss Asia Pacific World pageant threatened to call in the police last week in their row with dethroned Myanmar beauty queen May Myat Noe, demanding she return a gem-studded tiara from her home country.

Pageant founder Choi Youn accused May Myat Noe of absconding with the tiara, which media have said is worth $100,000 and which she won in South Korea in May, becoming Myanmar’s first international beauty queen.

She was dethroned because she was ungrateful, untrustworthy and had lied, the pageant organisers said in a statement reported by Asian media.

“It is now a matter of national image and reputation and she should be held accountable for (the tiara),” Choi told Reuters in Seoul.

He said organisers planned to file a complaint with police.

May Myat Noe told a packed news conference last Tuesday in Yangon, Myanmar’s biggest city, that she was still queen when she returned home with the tiara. It was only after arriving back home that she received a letter informing her she had been dethroned.

May Myat Noe added that she would give back the tiara only after receiving an apology from organisers who she said had spread lies about her that “damaged the integrity of my country”.

“Once such remorse becomes apparent, I shall return the crown willingly, without trace of reservation,” she said.

May Myat Noe accused the pageant’s organizers in Myanmar of falsifying her age from 16 to 18. She said organisers in South Korea attempted to coerce her into having breast augmentation surgery, but she refused.

Among other allegations, May Myat Noe said organisers told her she would need to “escort some business tycoons whenever they require my company” in order to raise money to produce her music album.

Choi said the former beauty queen had chosen to undergo surgery in Busan on August 20 and was legally allowed to do so despite her age, because her mother had consented.

He accused May Myat Noe of lying about her age on her application, but said organisers allowed her to participate anyway once they discovered she was actually 16.

Fans of the former beauty queen have posted messages of support on her Facebook page.

“Sue them for defaming sis!” posted Vivienne Wang. “You are naturally gorgeously beautiful! You do not need a single plastic surgery whatsoever!”

“The truth is on your side,” posted Lwan Chit Wai.

“Just return the tiara and stop all this nonsense in your life,” posted Mi Mi Naing.