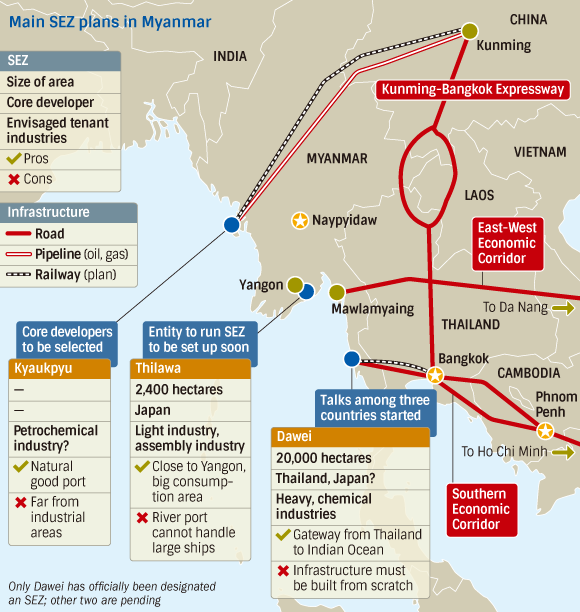 Last year, Thailand was the third-largest foreign investor in Myanmar at $6.6 billion in 2018-2019 following Singapore then China.

However, due to the unofficial border trade, this figure understates the value of the trade relationship. Thailand has the longest border with Myanmar at 2,416 km. Myanmar shares borders with four other countries: China, India, Bangladesh, and Laos.

Thailand joined the Association of Southeast Asian Nations (“ASEAN”) in 1967 and Myanmar 30 years later in 1997.

Myanmar has a large and youthful population, one of the highest literacy rates at almost 90%, is resource-rich, is a sizable market, and has a strategic geographic location. It is an interesting country with 135 different nationalities and seven states.

AFTA and AEC, which are sometimes mistaken as being the same, have created a common market among the 10 ASEAN countries of 500 million people.

But the ASEAN Free Trade Area of 1992 or “AFTA” gradually brought down tariffs on goods only.

The ASEAN Economic Community or “AEC” of 2015 as per the AEC Blueprint 2025 is broader and eliminates all tariff and non-tariff barriers for goods, services, labor, investment, and capital.

For Myanmar, being an ASEAN member state also enables it to take advantage of the ASEAN free trade agreements with China, India, Japan, Korea, and Australia and New Zealand.

Central to AFTA is that the goods have to have 40% local content under the “Rules of Origin”. Although Singapore is listed as the largest investor in Myanmar, some of this is due to AFTA rules and is investment companies and funds that are set up in the island state.

The World Economic Forum has ranked Singapore as the most competitive country in the world, ahead of the United States.

For Myanmar, ASEAN will be its most important trade relationship. Tied to ASEAN are the Special Economic Zones or “SEZ”.

There are three industrial estate projects in Myanmar all in partnership with the government:

Kyaukpyu has a good natural port but is far from the industrial areas. It will have a railway and pipeline to Kunming.

Thilawa is river-based and is near the big consumption market of Yangon. It cannot handle large ships and is suitable for light industry.

But Dawei developed by Thailand is by far the most important of the three industrial estates. It is 20,000 hectares and therefore almost 10 times the size of Thilawa.

It is suitable for heavy industry and chemicals and will be the gateway for Thailand and its neighbors to the Indian Ocean. The problem is it has to be built entirely from scratch.

Dawei will connect to the Eastern Seaboard of Thailand and save the need to ship around the Straits of Malacca. It is 10 times the size of the Eastern Seaboard. The only weak point of the SEZ’s is that they only offer 70 years (50 + two 10-year renewals) land leases. Thailand’s industrial estates afford foreigners freehold land ownership.

The new Myanmar Companies Law is different from Thai law in that Myanmar is a common law country and most of the companies laws are contained in this one legislation. Thailand is a civil law system. Private companies are governed by the Civil and Commercial Code and public companies by the Public Companies Act of 1992.

The Directorate of Investment and Company Administration or “DICA” is both the registrar of companies and a “one-stop-shop” for foreign investment. Due to the advantages of being categorized by the DICA as a Myanmar company to engage in any line of business (except if reserved to the state), many foreign investment deals are for 34% or 35%, etc.

Public Companies
In 2017, Myanmar introduced public companies. There are currently only about 300 public companies. So far, there are five companies listed on the Yangon Stock Exchange which was launched in 2015. There is also a Securities and Exchange Commission of Myanmar or “SECM”. To issue shares to the public it must file a prospectus.

The public company rules will be very familiar to investors from Thailand. However, the differences between private companies and public companies in Myanmar are narrower.

There are three ways to invest in Myanmar:

Opportunities
In the past, more than half of Thailand’s official investment in Myanmar has been in the oil and gas sector. The $1 billion Yadana gas pipeline has been a vital source of energy to Thailand.

Due to legal and business reasons, many foreign investors prefer to invest in or take over an existing foreign or new stake in a company.

On an M&A global heat map, Myanmar is one of the hottest markets for M&A activity. The area of greatest interest to foreign investors has been financial services, similar to when Vietnam’s market opened up.

By studying the experiences of other ASEAN countries like Thailand, Myanmar should be able to leapfrog the development time.

Having taught in Myanmar recently, the country is interested in the experiences of places like Singapore and Thailand and wanting to do business with its neighbors.

Andrew Delaney was a Fulbright Faculty in Myanmar in 2020.