Doubts Over Rule of Law and Poor Infrastructure Putting Off Investors: Suu Kyi 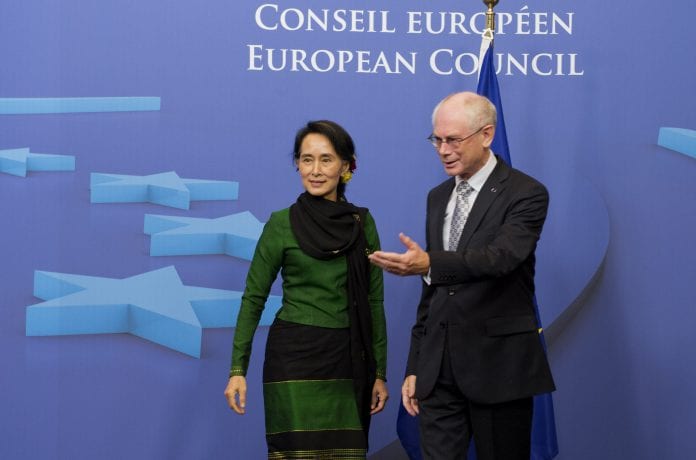 Myanmar’s opposition leader Aung San Suu Kyi said despite investor interest in Myanmar, actual investments had been much less than the government had hoped for because of doubts over the rule of law and poor infrastructure.
“I’ve talked to businessmen … They have no confidence in the situation in the country,” she told reporters in Luxembourg during her visit there to meet European Union foreign ministers.
“They are not happy about the political situation and they are not happy about the rule of law situation.
“They are not happy with the lack of infrastructure – no roads, no electricity, in some places no water.”
The Nobel peace prize winner also urged Europe and the United States to press Myanmar to reform what she said was an “undemocratic constitution”, partly because it effectively bars women from running for president.
Suu Kyi said the constitution stipulates that the president must have military experience, thus excluding women.
It also prevents Suu Kyi, 68, from running for the presidency in 2015 because it bans anyone who has children who are foreign citizens. Suu Kyi and her husband, the late British academic Michael Aris, had two children who are British.
The EU has already called for amendments to Myanmar’s constitution, but Suu Kyi said it must be more vocal “because unless this constitution is amended … we will have to take it that the present administration is not interested in taking reform further forward.
“It’s gone as far as it is going to go without amendments to the constitution and we are still very, very far away from a genuine democratic form of government,” she told reporters.
“The European Union must come out unambiguously on the need to change the constitution,” she said. “The opinion of the international community matters to this government because it wants aid and investment.”
The United States, too, should call for constitutional change, she said in response to a question.
She said the country was awaiting the results of a parliamentary enquiry on the issue at the end of the year. But the government had failed to publicly commit to the need for a rewrite, she said.
“So far they have said it was up to the legislature,” where the military holds 25 percent of the seats and where civilians cannot make up the 75 percent required for constitutional change because seats have not been filled, she said.
“This is a little disingenuous,” she said. “This is not good enough.”
An end to ethnic conflict also depends on overhauling the constitution because the existing one is not acceptable to ethnic groups, she said.
Myanmar President Thein Sein, whose quasi-civilian government took power in March 2011 after 49 years of military rule, launched a series of political and economic reforms that helped break Myanmar’s international isolation.
Suu Kyi, who spent 15 years under house arrest, was allowed back into politics and her National League for Democracy won a landslide victory in last year’s parliamentary by-elections, giving her a seat in parliament.
Asked if she would contest the 2015 election if constitutional obstacles are removed, Suu Kyi said: “We are not shutting any doors at the moment.”
Asked if change in Myanmar was now firmly entrenched, she said: “Nothing is irreversible.”