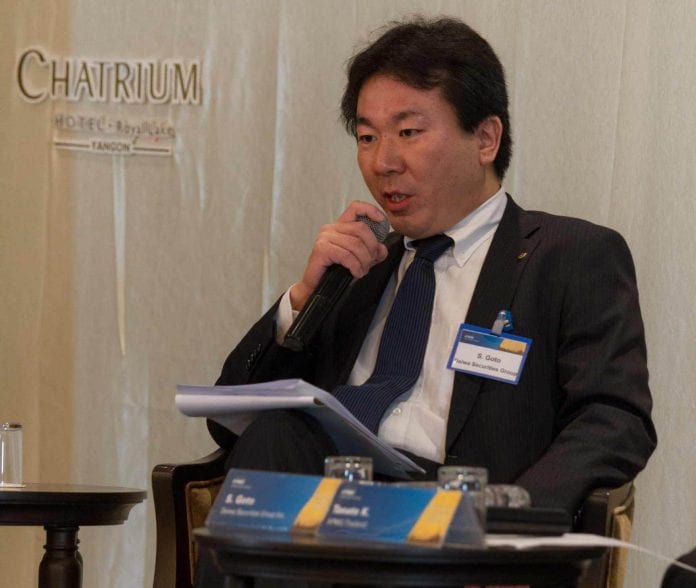 At the Myanmar Business Forum hosted by KPMG recently, Shinsuke Goto, director of Daiwa Securities Group Inc – the company providing technical assistance to the Myanmar government to establish the country’s stock exchange – revealed the draft listing requirements for companies seeking to list their IPO when the exchange becomes operational next year.

Companies seeking to list on the Yangon Stock Exchange (YSE) will be required to demonstrate profits for the previous two years or show K10 billion ($10 million) in market capitalisation, have a minimum capital amount of K500 million ($511,000), and have a minimum of 100 shareholders where the minority must account for at least 10 percent of the total equity. The corporate listing requirements are low in order to accommodate smaller businesses, Shinsuke said.

The YSE is expected to be operational by October 2015; however, many analysts have doubts about the government’s ability to establish policy and a sufficient regulatory environment in such a short time frame. In an attempt to increase assure the audience, Shinsuke Goto expressed his confidence in the process and noted that the Securities and Exchange Commission (SEC) is expected to be formed by mid-July and SEC rules are expected to be revealed in the next couple months.

In addition to the formal listing requirements, much attention is being paid to the challenges companies face in preparing to establish an IPO.

“Myanmar companies who are considering a listing on the exchange should first ask if an IPO is the right choice and at the right time given their stage of development and prospects,” said Yasuhide Fujii, managing partner of KPMG in Myanmar.

Instituting strong corporate governance requirements will be difficult for many businesses deemed desirable for listing on the exchange. These companies face immense challenges in terms of human resource capacity, information technology, low government capacity, and lack of knowledge on behalf of the general public.

Additionally, the establishment of the ASEAN Economic Community (AEC) and regional capital integration will challenge the YSE, increasing competition for the nascent exchange.

Companies with the greatest potential for listing on the YSE will come from banking, agriculture, consumer products, infrastructure, construction, manufacturing, and real estate sectors, said Fujii.

Myanmar currently has an over the counter market (OTC) called the Myanmar Securities Exchange Centre, which has two companies with tradable shares, and is expected to be replaced by the YSE next year.

While no announcement has been made if foreign companies will be allowed to list on the YSE, much emphasis is being placed on readying local companies.

Five companies are expected to be listed when the YSE launches in October of 2015.