Economy to Grow 7.8pc in Next Two Fiscals: ADB 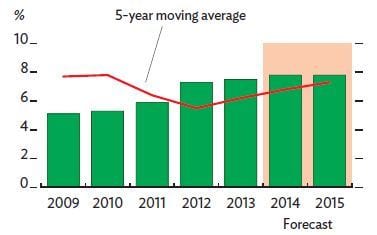 KMyanmar’s economy is forecast to post accelerated growth of 7.8 percent in the next two fiscal years compared to the recently-ended fiscal, benefitting from rising investment and improved business confidence since the government started to revive and open the economy three years ago, the Asian Development Bank (ADB) said.

The Southeast Asian country’s economic growth for the fiscal year 2013-14 which ended in March is estimated at 7.5 percent, supported by foreign investment, commodity exports, buoyant tourism and credit growth, the Manila-based lender said in its recent Asian Development Outlook 2014 report.

A number of developments last year contributed to raising Myanmar’s international profile as an investment destination, including the award of telecommunications licences, selection of international investors as preferred bidders for developing airports, and hosting of the World Economic Forum on East Asia and the Southeast Asian Games.

“Myanmar has undergone an unprecedented transformation since it announced a series of reforms three years ago,” said ADB President Takehiko Nakao.

“ADB is keen to support investment in the energy, transport, urban, agriculture, and social sectors such as education and health, which help build the foundations for inclusive growth,” he said.

However, ADB said risks to the outlook will come from ethnic and sectarian tensions, vulnerability to bad weather and inflation. Inflation is forecast to accelerate to 6.6 percent in FY2014 and 6.9 percent in FY2015, owing to a boost to public sector wages, higher electricity tariffs and rising property prices in cities, the lender said.

ADB said meeting the energy challenge will play a major role in poverty reduction and stimulating regional development, while improved power supply to all ethnic groups will contribute to the peace dividend.

Myanmar’s power sector is one of the least developed in Southeast Asia. Only over half the total installed capacity of 3,593 megawatts is firm, or highly reliable, as weather-dependent hydropower accounts for 75 percent of total electricity generation.

Myanmar’s per capita electricity consumption was only 160 kilowatt-hours in 2011, the lowest in Southeast Asia, resulting from a low electrification rate estimated that year at 28 percent of the population, weak industrial development and a lack of investment, according to the World Bank and ADB estimates.

A recent ADB study noted that Myanmar could reach upper middle-income status by 2030 if it overcomes development challenges, but currently about a quarter of the population lives below the national poverty line.