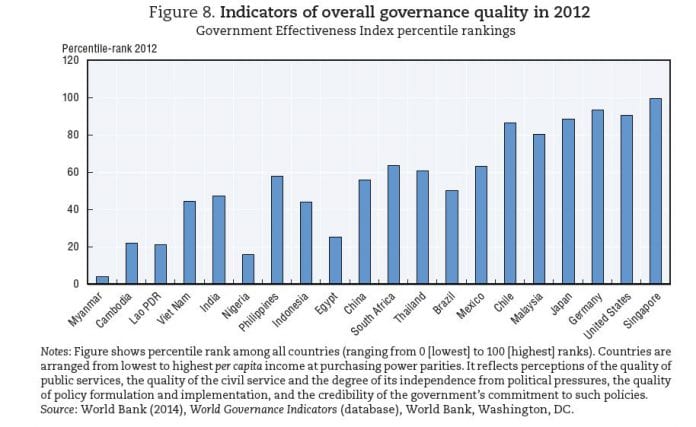 While the outlook for many OECD countries remains subdued, Emerging Asia is set for healthy growth over the medium term, according to the latest Economic Outlook for Southeast Asia, China and India.

The region remains exposed to domestic and external risks, however, that make continued reform, regional integration and the strengthening of institutional capacities critical, the OECD report.

The outlook sees the large ASEAN-5 economies – Indonesia, Malaysia, the Philippines, Thailand and Vietnam – sustaining their growth momentum over the medium term, led by Indonesia (6.0 percent) and the Philippines (6.2 percent). Economic prospects for Brunei Darussalam and Singapore are stable, while Cambodia, Lao PDR and Myanmar are set to speed ahead with average annual growth exceeding 7 percent.

Of Emerging Asia’s two largest economies, China’s growth is forecast to slow to 6.8 percent over 2015-19 as it adjusts to changing demographics, a shift from investment- to consumption-led growth and agricultural, environmental and educational challenges. India’s growth should remain stable at 6.7 percent, before any potential boost from the new government’s reform plans.

“While the Emerging Asian economies show resilience, they remain exposed to several risks, including slowing external sources of demand and regional political instability,” said OECD Deputy Secretary-General Rintaro Tamaki during the launch of the report at the ASEAN Business and Investment Summit in Myanmar.

“Further accelerating the process of regional integration to build the ASEAN Economic Community by 2015 is necessary, as is building the domestic capacities in the public sectors to support the implementation of policies that will foster growth and development.”

“Strengthened institutional capacities and effective governments are needed across the region to foster sustainable and inclusive growth. The Outlook highlights the importance of pursuing comprehensive, well-designed and appropriately-paced reforms, while recognising the importance of country-specific contexts in shaping their outcomes” said OECD Development Centre Director Mario Pezzini.

Strong growth rates fostered by Malaysia’s Tenth Plan (2011-2015) put the country on a favourable path but much still needs to be done to reach inclusiveness and sustainability targets. Malaysia will also have to improve its productivity levels to become a high-income country, the report said.

OECD said public sector reforms have made substantial progress in Southeast Asia, China and India, though many countries in the region need to make further improvements for a better ranking on the Government Effectiveness Index and other measures of public sector performance.

Emerging Asia has had mixed success in building the institutions on which markets rely – such as the rule of law and contract enforcement – and in enforcing tax and regulatory demands on the private sector, OECD said in the Outlook.

It added that these areas identified of potential weakness need to be addressed to cope with informality, which hampers the real growth potential, and to encourage the expansion of flexible formal markets.