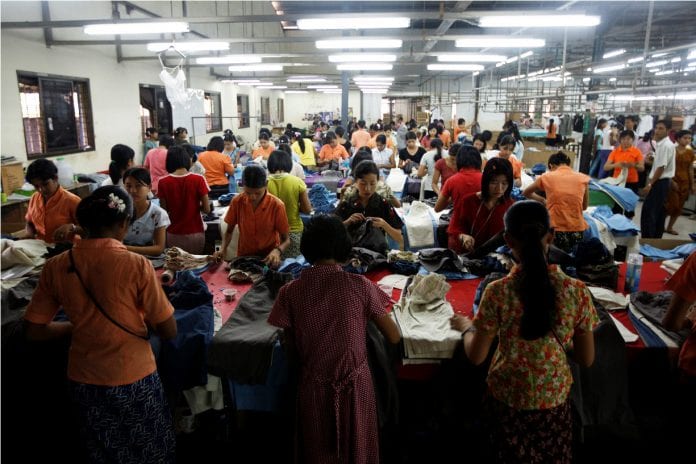 Myanmar is undergoing rapid modernisation. There is both momentum in a number of sectors and much work to catch up remains ahead. As an example, take banking. Today, the country’s commercial banking system is only partially developed; there are currently 1.9 commercial bank branches per 100,000 inhabitants, compared to 8.1 in neighbouring Bangladesh. Bilateral and multilateral development projects are under way to put the corresponding institutional infrastructure in place, including modernising domestic capital markets with technical assistance from the Tokyo Stock Exchange. Over time, modernisation will help enabling capital investment into productive activities in the real economy including textile and garments, the focus of today’s post.

An Investment Mindset is Key for Industry Upgrading

This series has focused on apparel and argued that there is a major value-creation opportunity in the wings. The cluster becomes unstoppable wherever sustainability can be successfully integrated in the value creation formula while managing total cost. The apparel industry thus can become both very large in the coming years and make an important contribution to socioeconomic progress in Myanmar. To illustrate this point, the new report released by Impact Economy – a global impact investment and strategy firm – titled Creating Sustainable Apparel Value Chains, discusses a number of best practice examples and argues that a focus on the manufacturing stage provides one of the most promising avenues for industry transformation in terms of social and environmental performance and competitiveness.

The challenge now is to determine how to achieve this transformation in practice and at scale. An investment mindset is the key fresh ingredient here, both for fostering total resource productivity and for securing transparency across the supply chain – improving infrastructure and working conditions in the process. Social and environmental performance requirements are becoming ever more stringent. But transformational and sustainable improvements will never be brought about by simply sending more inspectors to police factories, not building long-term mutually beneficial relationships between buyers and producers, or without upgrading manufacturing.

Given the generally low resource productivity in the industry, there is a win-win opportunity for investment capital to improve social and environmental conditions while also enabling producers to save money (especially in the case of investments in energy efficiency). This is possible because these types of investments capture a higher margin by entering higher-value added production, which then drives financial returns.

For example, $650 billion total investment is needed by 2030 to support the country’s growth potential, $320 billion in infrastructure alone. Myanmar is a frontier economy and is already attracting investment in the garment sector. The country attracted $42 billion in foreign direct investment in fiscal year 2012-2013, the overwhelming bulk of which went to investments in power, oil and gas. Myanmar’s 2012 Foreign Investment Law allows for 100 percent foreign ownership without the need for a local partner. The law has improved the investment environment by providing special incentives as well as important regulation regarding foreign exchange, dispute resolution, and the ability to deduct certain expenditures from taxes and obtain relief on import duties.

Investing for Financial and Social/Environmental Return

To be sure, uncovering investment opportunities can be challenging in practice. Critical constraints include local management bandwidth and transparency. Even here, though, promising solutions have come into view. An investment partnership between the UK development finance institution CDC and leading Swedish hedge fund group, Brummer & Partners AB provides a helpful illustration for how an investment strategy that targets both financial returns and social and environmental improvements can play out on the ground. Alongside other investors including FMO, the IFC and Norfund, as well as commercial investors such as pension funds and high net-worth family offices, the CDC invested $10 million into the first Bangladesh-focused frontier private equity fund targeting firms in neighbouring Bangladesh’s export, agriculture, health, education, IT and services sectors.

Investee Ananta Apparels Limited (AAL) highlights the social and environmental impact potential of this investment approach. AAL is among the top 10 manufacturers of woven product in Bangladesh and is one of the country’s leading apparel exporters. The company specialises in denim products with monthly production capacity of 1.8 million woven bottoms across three factories that comprise 850,000 square feet and employ about 13,000 workers. Major customers include leading retail brands such as H&M, GAP and the Bestseller Group. AAL has embarked on an ambitious expansion plan, which involves the relocation of AAL’s existing casual woven bottoms factory to a new custom built facility south of Dhaka, and thereby replacing its original factory in downtown Dhaka.

This development is an opportunity to provide adequate physical infrastructure, particularly in a country where 90 percent of buildings are not compliant with the building code. The project will cost approximately $24.4 million, of which the IFC will provide a financing package for up to $8 million. The social and environmental impacts include approximately 1,500 expected new jobs; technology transfer as AAL intends to adopt global best practices in terms of lean manufacturing concepts, factory efficiency, worker productivity and energy efficiency standards of the overall industry; new local supply chain linkages as the project will generate incremental business for medium and small enterprises in the value chain, including accessory and package suppliers, service providers and logistics support.

The government stands to benefit once the project generates tax revenues. And one should not underestimate the overall demonstration effect of a company that is able to commit to adopting best practices in corporate governance, environmental and safety compliance, labour standards, and energy efficiency in Bangladesh’s readymade garment industry while still remaining competitive. There is no logical reason why a similar approach should not work in Myanmar.

The conditions for change are moving into place in the textile and garment industry, especially in Myanmar where enthusiasm to catch up with its neighbours is at an all-time high. The green transformation of the global economy is in process, and the resulting savings potential is considerable in an industry with low total resource productivity. Solutions to social issues are of course difficult to implement but an era of innovation and less time constrained responsible investment capital is starting to make its impact. What’s more, sustainable forms of consumption will catch on eventually as the information revolution fosters ever-greater transparency.

Disruption in its many forms is on its way. One respondent to the online survey for Creating Sustainable Apparel Value Chains commented: “Within a 10-20 year period I think the industry will be changed severely by higher customer awareness on labour standards and environmental issues, production techniques such as robotics, 3-D printing and new materials, and increases in costs due to higher raw material prices.”

Getting the job done and setting Myanmar on a path to becoming a leading sustainable apparel cluster is possible. This shift will require transferring best practice, collaboration between government, industry associations, producers, buyers and civil society, and the guts to act.

We do not know how the world will look in 2030 or in 2050, but we do know that there will be demand for apparel products as long as there are people. 9 billion people will have to clothe themselves, not to mention look and feel good while doing it. The Rana Plaza disaster, and the ongoing fallout and consequences, illustrates that an unrelenting and unforgiving pursuit of growth is simply too risky for the industry to continue.

The analysis presented here shows that systemic transformation that drives both better social and environmental performance and greater competitiveness is possible – for Myanmar, Asia’s current apparel frontier, sustainable apparel value chains hold the prospect of significant development dividends. An old Burmese proverb says, “Collect the water while it rains.” It would seem that the opportunity to leapfrog is now.

Dr Maximilian Martin is the Founder and Global Managing Director of Impact Economy. He also serves as Founding Faculty in Residence at Ashoka U and Lecturer in Social Entrepreneurship at the University of St. Gallen. He previously served as founding global head and managing director of UBS Philanthropy Services, head of research at the Schwab Foundation, senior consultant with McKinsey & Company, instructor at Harvard’s Economics Department, and fellow at the Center for Public Leadership, Harvard Kennedy School.