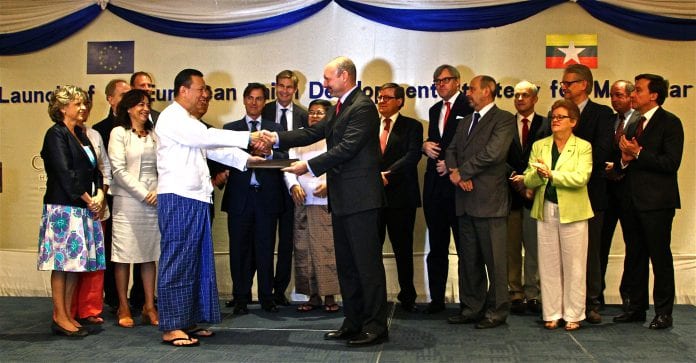 The money will be injected under a three-year strategic cooperation program – “Joint EU Development Partners’ Transitional Strategy for Myanmar 2014-16.”

The new strategy takes previously allocated funds and reorganises them to provide grants for a wide range of purposes, the five largest being rural development, education, the health sector, governance and peace building.

At a handover ceremony of the strategy, EU ambassador to Myanmar Roland Kobia emphasised the importance of peace, democratisation and order to the EU’s financial support.

“If you have destruction after construction, development won’t work. This money is coming from the pockets of European taxpayers… so of course we want to see an efficient use of this money,” he said.

Since the beginning of Myanmar’s reforms, the EU and its member states have been actively engaged in Myanmar’s economic, social and political development.

The stated purpose of this coordination of funds is to increase efficiency, a common problem in aid projects.

In addition, combining this money would allow the EU to exert greater influence over Myanmar, through the promotion of democratisation, rule of law and support to the 2015 elections.

The process began in November last year, when a high-level EU-Myanmar task force comprising Union Ministers and European Commissioners, senior officials and business leaders made it clear that pooling strengths and resources between the EU member states assisting Myanmar would boost efficiency.

Myanmar will get €30 million per year in the area of peace building, while in governance it will get €31 million, in rural development €70 million, in health sector €40 million, in education €44 million, and in the field of trade and private sector development €14 million. In addition, four cross-cutting issues, including human rights, civil society, environment and fight against climate change, and cultural cooperation will receive €5 million, 16 million, €6 million and €1 million respectively.

The EU grants Myanmar a favourable trade status, classifying the status as, “everything but arms.” It is the largest aid donor to Myanmar, as well as to the world.