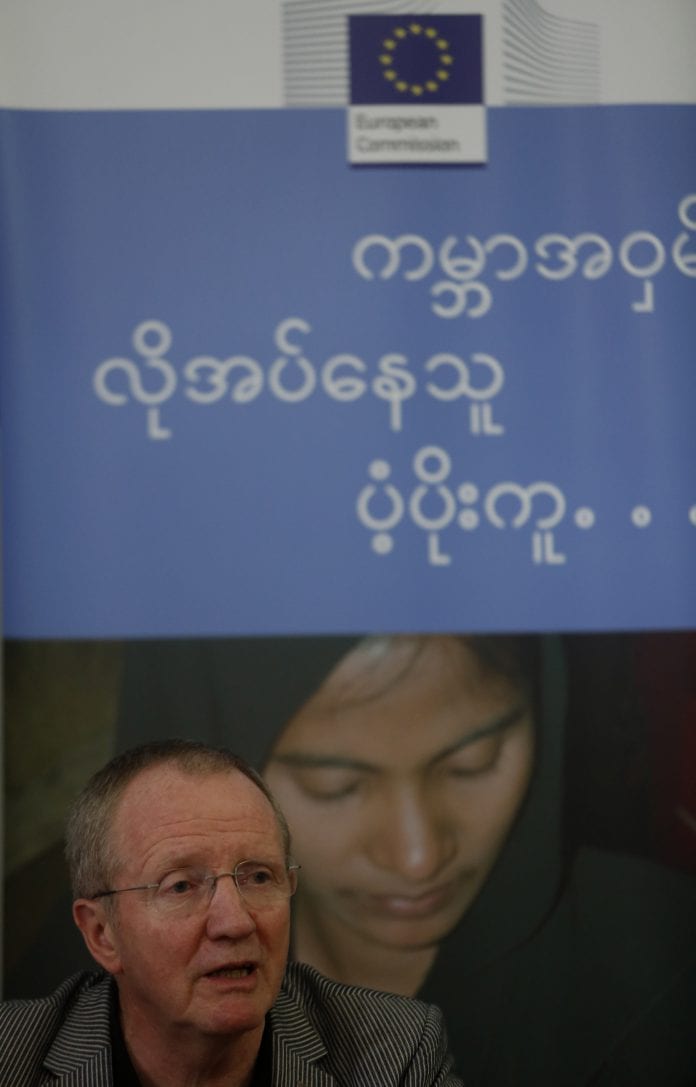 The European Commission will provide further humanitarian funding of €3 million ($4.08 million) to assist victims of violence in Rakhine and Kachin states in Myanmar which has left thousands of people displaced and homeless, the EU’s Humanitarian Aid & Civil Protection department (ECHO) said.

This brings the commission’s humanitarian funding in 2012-13 to €48.6 million ($66 million), Claus Sorensen, director general of ECHO, said at a press conference.

The assistance will be used to provide food to those affected, and will be implemented by the United Nations World Food Program (WFP), which is already active in the affected areas and has the required expertise and logistical means, ECHO said in a statement.

According to the United Nations, more than 140,000 people have now been displaced since June 2012 in Rakhine state, mostly the Muslim minorities, while some 115,000 displaced live in numerous camps in Kachin state.

Sorensen said Myanmar has made positive political developments through the reform process, which would make Myanmar a magnet for investment, and hoped the violence would not jeopardise the positive outlook.

“Despite the efforts at reconciliation and the peace process underway to end violence, we remain extremely concerned about the protection of thousands of civilians in both Rakhine and Kachin states.”

Having returned from a visit to the Rakhine state, he said he was disturbed by the dramatic deprivation of the affected communities and disrespect of fundamental rights.

“The victims plead first and foremost for security and for a durable solution that allows them to go back to their lost homes and regain their dignity.”

Sorensen expressed the hope that authorities would do their outmost to ensure unfettered access for humanitarian aid workers to the displaced in Rakhine state:

“We are disturbed by threats made by some radical groups against national and international staff of aid organisations who are trying to provide impartial humanitarian assistance to all those affected by violence in Rakhine state,” Sorensen said.

“There are clear opportunities to improve the situation of thousands of people that have been affected by violence and deprived of their most  basic rights, notably by bringing in supplies, food, shelter, health and protection.

“But a more lasting solution would benefit from all responsible political forces, the government as well as local authorities taking decisive steps to protect civilians and restore their rights. Everything should also be done to ensure development in all parts of the Rakhine state and bridge the differences between the communities to create an environment conducive to security and prosperity,” he added

Since the beginning of the violence, ECHO has continuously deployed experts to both Rakhine and Kachin states to assess the humanitarian situation in the camps and communities.

Claus Sorensen visited Myanmar to make an assessment of the humanitarian situation from 19-23 November.

ECHO has maintained an office in Yangon since 2005 to facilitate the delivery of humanitarian aid to the most vulnerable people. Since 1994, ECHO has provided over €179 million in humanitarian aid.