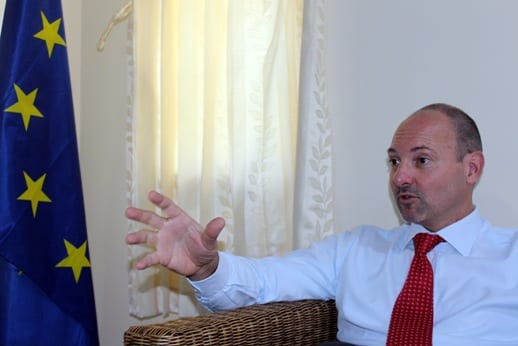 In April, the European Union permanently lifted all remaining economic sanctions against Myanmar as a reward for the ongoing reforms that have been taking place in the country since a quasi-civilian government came to power in 2011. This was followed by Myanmar being readmitted into the Generalised System of Preferences (GSP) status, allowing Myanmar’s industries to benefit from duty-free access to EU markets on their exports, while last month saw EU High Representative for Foreign Affairs and Security Policy Catherine Ashton visit Myanmar leading the first EU-Myanmar Taskforce.

The signs are clear. The EU is pleased with the reforms that continue to take place in a country that was, for five decades, practically isolated from the international community. Another important step took place earlier this year when Roland Kobia was announced as the EU’s first ever resident Ambassador in Myanmar. He came to Myanmar after having been previously EU Ambassador to Azerbaijan and having spent time in the Private Office of the EU Commissioner for Energy as well as seven years in EU delegations in Africa dealing with transition and conflict countries.

“The message we want to send is that we support the efforts that have been made since March 2011 and we think this is a historic opportunity for the international community to accompany the reforms and offer help when and where it is needed,” Kobia told Myanmar Business Today in an exclusive interview last week. “At the time, we saw that the reforms seemed to be genuine and we wanted to show that the EU is there to support the efforts being made by the new government in its transition. Political and economic transitions are difficult exercises, help is often welcome,” he said.

Speaking of the EU’s overall role within the country – which began in 1996 with funding projects aimed at development and has seen more than $500 million in total – Kobia said that the aim is to promote a number of values within the country, including democracy, human rights, rule of law, gender equality, judiciary independence and free market principles. Fundamentally, the EU wants to promote peace, stability and security as the foundations of the ‘New House of Myanmar’ that is being built”.

During the EU-Myanmar Taskforce, which took place in Yangon and Nay Pyi Taw on November 14 and 15, the EU announced that it had identified four priorities for its development aid to Myanmar for the next years: education, rural development, governance and capacity building, and peace. The EU also used the event to sign agreements with the Myanmar government on Small and Medium Enterprises (SMEs), mining and tourism, as well as an EU-Myanmar Business Council and a European Chamber of Commerce in Myanmar.

How the international business community views Myanmar as a place to invest is important as the country continues its reforms, Kobia said.

“Companies from Europe see Myanmar as this big new territory where there are great business opportunities, so they come here with a great desire to invest. Now, when people come here, they  realise that this is a different environment compared to Europe. So they start reflecting and begin to see various problems that even the government itself recognises,” he said, referring to issues such as high land prices, access to electricity, lack of human resources, the protection of investments and other problems that are affecting foreign businesses interested in beginning operations in Myanmar.

“I’m not a businessman, but I know there’s one thing that businesspeople don’t like, and that is uncertainty. You need to trust where you put your money, and you need to ensure that you will put the money in a basket that is stable, otherwise you fear you can lose that.”

One key area for Myanmar’s development is the Small and Medium Enterprise (SME) market, which makes up for an estimated 90 percent of all companies in the country. During the Task Force, the SMART Myanmar (SMEs for Environmental, Accountability, Responsibility and Transparency) programme was launched, a $2-million project aimed at helping Myanmar SMEs to develop.

“In any country of the world, SMEs are the backbone of the economy. We want to help [Myanmar] constitute a strong network of SMEs, therefore constituting a middle class, which in turn will help the country out of poverty.”

He added that the way to help SMEs is to set up a legal framework to help them flourish, giving people an incentive to develop a sense of entrepreneurship.

“I’m not an expert in what happened before, but a Socialist economy isn’t the sort of environment where entrepreneurship is encouraged. So one thing is the legal framework to make it easier for people to start a company, you also need to provide know-how, transfers of technology and technical assistance. All these things the EU – and other donors, because we’re not the only ones doing this – can do to help create a good business environment.”

Another EU-led programme has seen €10 million ($13.5 million) pledged to a programme that will train 4,000 Myanmar police officers in community policing and crowd management, another sign, Kobia says, that the EU is serious about its engagement with the country to the benefit of the population.

“In countries in transition, you need to show the population that politicians are not just talking about changes. People want  to see real concrete benefits to the country – they want to feed their children better, they want to send them to better schools, they want less corruption and harassment and they want to see a police force that is there to help them.”

Critics of the programme have claimed that providing Myanmar with riot gear violates a longstanding EU arms embargo, but in an earlier press conference, Kobia countered, “the equipment the EU will be providing to the police is only purely defensive, nothing that can be used offensively.” Shortly following this interview, riots began at a football match in Yangon, when the Myanmar national team was knocked out of the Southeast Asian Games football competition after losing to Indonesia. Following the game, supporters began tearing up seats, setting fire to public property and hurling rocks at police. The police’s response has come under some criticism, with officers first standing by, and then later acting in a provocative manner – there are reports of some police officers throwing stones back at the rioters. In other incidents, most notably the wave of anti-Muslim attacks that have taken place in parts of the country in the past year, police have been criticised for standing aside as mobs attacked homes and razed entire villages. Kobia says that these sorts of incidents show the need for proper training of Myanmar’s police force, but it is work in progress and will take time to change mentalities, he said.

The EU and other governments have been criticised in the past for rewarding the Myanmar government before genuine democracy has reached the country’s citizens. Political prisoners still languish in jails – earlier this year, Thein Sein promised that all would be released by the end of the year, although 41 still remain incarcerated – and ethnic groups are still reporting large-scale abuses, and while Kobia admits that problems remain, overall the country is making progress in this area.

“At the beginning, we believed in this country and we believe in the people; it has so far proven the right thing to do. But we remain cautious and demanding… the lifting of sanctions must come with progress, and the GSP is linked to certain benchmarks, with regards to democratisation, human rights and labour laws. So the EU remains vigilant and attentive.”

One area the EU continues to look very closely at is Rakhine state, most notably the plight of the Rohingya people, a Muslim minority group of which thousands have been displaced by violence in the region. Denied citizenship by the government – who see them as illegal ‘Bengali’ immigrants from neighbouring Bangladesh – thousands of Rohingya are languishing in desolate internally displaced person (IDP) camps, unable to leave or to work.

With few options available, many women in the camps are turning to prostitution in order to provide for their families and with men unable to work, domestic violence is reportedly on the rise. It is an issue, Kobia says, that the government and all political and religious leaders must take seriously and deal with.

The EU can only guide the government in addressing the issue, Kobia says, and this can be done by encouraging them to be aware of the dangerous spillover of this issue and to consider how they are viewed internationally.

“It is also a question of reputation. They must show that they are really serious about changing the country. A country that will have the chairmanship of ASEAN, let’s not forget that there are Muslim countries in ASEAN. They must ensure that they are really committed to dealing with a real problem that is not only a concern at a human rights level, but can also derail part of the transition. It can also have an impact on the business environment … it could deter investors, it may scare off investment.”

While some international observers criticise Myanmar for inaction, Kobia says that he feels that this is an issue that the government is at least looking at.

“What I can see is there have been some attempts [to deal with it]. Thein Sein has been there, he’s met leaders from both [Muslim and Buddhist] sides and some Buddhist leaders have been arrested for their role in the violence. He made a political statement calling for peace, so this is all very good.

“But we remain concerned, as it was expressed by the EU and many others in the last UNGA resolution. The EU, the member states of the EU, the international community are all concerned about this issue and I believe that it is not in the interest of Myanmar to let this deteriorate further.”