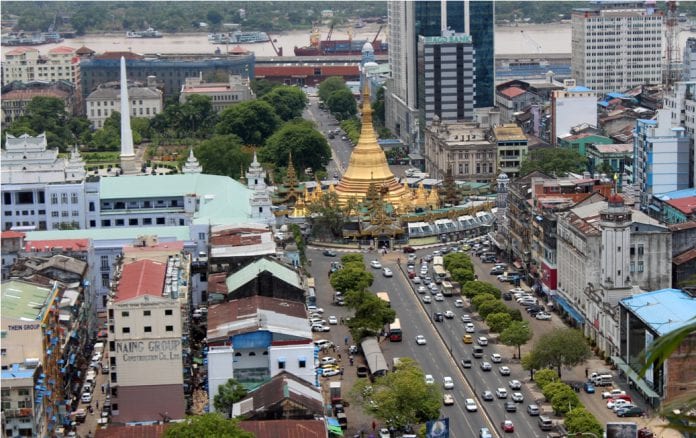 Following an exodus of foreigners following independence,in recent years Yangon’s ever expanding expatriate community has ballooned from a figure barely in the hundreds, to the tens of thousands. Their stories and experiences of a once great city trying to re-establish itself provide a remarkable insight into a nation at a unique stage in its development.

“I came here primarily as a traveller, however, after being here for a couple of weeks, I noticed it was impossible to get any up-to-date information on the city for foreign visitors. I felt I could help change this,” the founder of Yangonite, an online guide for expats, tells me excitedly over an iced coffee in downtown Yangon.

Greg Klemm, an Australian, typifies the burgeoning expatriate community hailing from nations as diverse as Honduras to Ukraine, who have opted to make Yangon their new home and place of work.

Intrigued to learn more of their quotidian lives, I embarked on a mission to investigate the experiences of Yangon’s expatriate entrepreneurs, with the intention of gaining a clearer insight into how they have fared in Myanmar.

To my surprise, I found Yangon’s expats extremely reclusive. Having set out to interview around thirty people, I settled for little more than ten. When I delved deeper, the reasons for this became clearer. Some individuals were reluctant to reveal information that could be utilised by their competitors, whilst others operate in what one might describe as a legal grey area, or downright illegally – which explains why some were reluctant to discuss their experiences, and why collating reliable data remains very problematic. That did not perturb me, however, as I uncovered many interesting observations from those gracious enough to put up with my nagging emails and probing questions.

Whether one is expanding on existing regional operations, exploiting a niche, or simply in love with the country, the allure of Myanmar is strong. Yet despite the nation possessing staggering opportunities for potential investors, there are a myriad of obstacles and oddities, which make establishing a successful business a daunting challenge. The pace of getting things done can be frustrating at best, though money had been known to help speed up this process.

A common complaint of those I spoke with is the differential in costs for locals and foreigners. It is common practice to have vastly differing “local and foreign rates”in many aspects of daily life. This leaves foreign investors out of pocket and often reluctant to invest their capital. Indeed, in 2013 the World Bank rated Myanmar 182 out of 189 nations in ease of conducting business, and 189 of 189 on starting a new business. In spite of this, foreign entrepreneurs selling everything from foie gras to organic cleaning products have tried to make something for themselves in Asia’s “final frontier”.

Yangon was formerly one of the grandest outposts of Britain’s global empire, yet in recent times, it has unquestionably suffered from the debilitating effects of enforced isolation. Myanmar may no longer boast the second strongest economy in Southeast Asia, in fact it lies bottom of all ASEAN countries per capita.

But Yangon remains Myanmar’s economic hub and home to over six million welcoming individuals. In recent years the city has undoubtedly embarked on the first forays of reintegration with the international community. Hotels have been spruced up, some of the notorious holes in the pavements are covered, and many restaurants have valiantly attempted to translate their menus into English – “Nazi fried rice” anyone?

Yet, one only has to take a short flight to Bangkok to comprehend the vast gap the city is facing to catch up.

With the exception of Aung San Suu Kyi or the occasional gloomy news report, outside Myanmar very little accurate information is known about Yangon. However, like a long-suffering mute, Yangon has finally found her voice. With a vivacious press permitted a surprising degree of freedom, Yangon’s expats have followed this lead and are committed to providing greater information on the city.

A handful of foreign-run city guides such as Yangonlife, Yangonite and Myanmore have sprung up attempting to plug much of the vast black hole that foreigners face in easily accessing reliable information on the city. They cover topics as diverse as beauty pageantsto restaurant reviewswhilst Myanmore has even held an awards ceremony. Although internet connections are still painfully slow today, this innovation would have been unthinkable just half a decade ago. It is only two years since one of my interviewees had to upload his website whenever he was in Bangkok. Now he is able to update his page on a daily basis providing useful information for Yangon’s expats and locals alike.

Whilst those who succeed can flourish, all can change in the blink of an eye, in a country with a government maintaining total control. One individual I spoke with had been a successful wine merchant, supplying expats as well as the city’s burgeoning middle class, with the finest Bordeaux had to offer, when disaster struck.

A competitor angered a government official who retaliated by activating antiquated legislation banning the private importation of beer and wine. Thus cutting the wine merchant’s supply chains completely, leaving his operations “running at a severely reduced capacity,” and his customers thirsty.

In truth, the obstacles experienced when operating in Yangon are innumerable and too diverse for me to cover in full. Yet, there were certain similarities and recurring themes that cropped up among my interviewees.

Unsurprisingly, those operating online businesses were affected by stuttering internet speed, and the speed of almost everything else for that matter. A lack of a sufficiently skilled local workforce was also a recurring theme – there simply are not enough computer-savvy English-speaking Burmese to go around. Those sufficiently qualified can be very selective, often opting for larger companies that can afford higher salaries.

People operating different types of businesses faced differing problems. A common issue for those companies requiring higher end locations was finding the right locale. Florence Grangerat of Law firm Audier and Partners claimed “there simply is not enough affordable real estate in downtown Yangon.”This sentiment was echoed by many others, and with good quality office space virtually non-existent, she was forced to compromise on the standards she had become used to, both in Europe and with other operations in Vietnam.

Some individuals find more on their plate than working in the wrong postcode. Foreign investors are risking high stakes when operating in Myanmar. Most operations legally require a local partner; it is therefore imperative to choose the right one. With legal protection for foreigners virtually non-existent and seldom likely to stand up in a court of law, it is essential to have a reliable local network.

On a cultural note, the complexities of Burmese society are so broad and singular that it is impossible for Westerners to fully comprehend them. Trinh T. T. P. of Yangonlife provided an insight noting that foreigners need to “respect and understand” that like it or not, this is Myanmar’s culture. Though some aspects may seem frustrating to a “westerner,” “we have no right to assert that our social mores are superior.” Instead, those who succeed in Myanmar must have their “eye on the bigger picture,” dealing with short-term discomforts and the peculiarities of a country awakening from fifty years of isolation.

It seems that having the patience of a saint, or at least a Buddhist monk, is a vital prerequisite for any operation in Myanmar. Trinh added that one must make the most of the local culture by “working within it instead of trying to resist it,” something that should be noted by any prospective investor.

In spite of the all the difficulties faced – the power outages, the cockroaches, the surprisingly expensive rental costs – not one of the individuals I spoke to had any real regrets about coming to Myanmar. Instead, they were drawn to the vast opportunities, the charm of the people, the enchanting monastic dawn chorus or maybe just the dangerously cheap liquor.

Though sourcing information remains problematic for expats, like most things in Myanmar, it is improving little by little. This is largely down to the work of enthusiastic individuals dedicated to creating a future for themselves and for Myanmar.

With elections coming next year that could herald the biggest change to the country since independence, we are privileged to live in a nation at a crossroads in its development. Though the path it may take is uncertain, it seems that no matter what your occupation, working in Myanmar is, as expressed by Trinh: “a fulfilling, life enriching experience”.

Jonathan Harvey is from London and he has been interning at Consult Myanmar in Yangon since February.