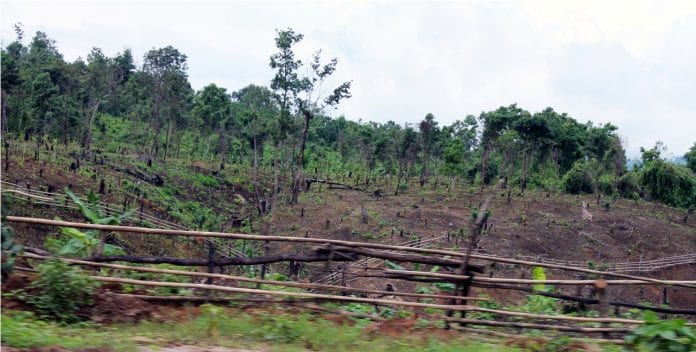 The forest coverage that will be reported in an upcoming report by the Food and Agriculture Organization of the United Nations (FAO) will be lower than an earlier estimate of 46.9 percent made in 2010, U Tin Aye, former director of the forestry department, said at a seminar.

The FAO 2010 revealed that Myanmar’s forest covers 46.9 percent of the country, of which 19.87 percent is covered by closed forests, while “open forests” cover the rest.

Open forests are mixtures of trees, shrubs and grasses in which, unlike closed forests, the tree canopies do not form a continuous closed cover. They occur in savanna environments in the semi-arid, sub-humid and humid tropics.

“It is certain that the coverage figure in FAO’s 2015 report will be lower than that of 2010. Yearly deforestation rate from 2000 to 2010 averaged 0.9 percent of the total coverage. If there are 100 acres of forest one acre is disappearing every year. In 2015 the deforestation rate is expected to reach 1.23 percent, so total coverage would be lower than 46.9 percent. Also, closed forest coverage will be lower,” U Tin Aye said.

Central Myanmar’s Bago Mountain range and Shan plateau are seeing deforestations and closed forests are conserved only in remote and border areas, he added.

Most of the official logging operations was approved under the current government, which banned timber log exports in April last year.