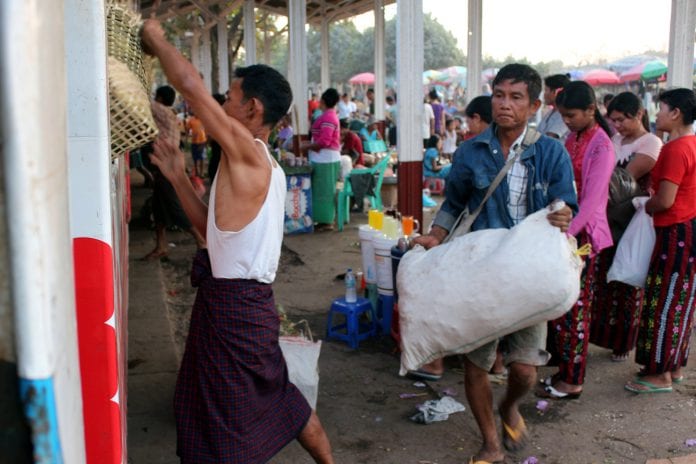 Improving the agricultural sector, building a skilled labour force and implementing structural reforms in the financial sector are essential for the larger development of Myanmar, according to the latest report by Organisation for Economic Cooperation and Development (OECD).

With the help of nations with developed agricultural sectors, the government should promote modern farm technologies and agricultural research as well as provide support to expand market opportunities, the “Multi-Dimensional Review of Myanmar” suggests.

“Myanmar’s transformation to a modern economy could be kickstarted through a strong focus on the agricultural sector where most people currently work. Increasing access to finance in rural areas and improving farmer skills will be vital to boosting farm productivity, freeing up workers for manufacturing and services,” said OECD deputy secretary general Rintaro Tamaki, at the launch of the report in Yangon.

As for the labour situation, the government should create job opportunities and competitive wage standards to prevent the considerable outflow of workers into neighbouring countries such as Thailand and Malaysia, the report says.

While noting the government’s progress towards establishing a stock exchange, the report also states the need to transform the state-run banks into institutions that can effectively support trade and commerce as well as serve the needs of the rural population regarding access to finance.

“The agricultural sector has many needs. If [the government] really wants to improve it, they can realise it by providing the same support as those enjoyed by model farm projects in Naypyitaw to the rest of the 30 million acres around the country. In Naypyitaw farms, transportation infrastructure and market access are all developed. The current method of giving out meagre loans and support to a farm here or a farm there won’t work,” Dr Soe Tun, joint secretary of Myanmar Rice Federation told Myanmar Business Today.

Average per capita income in Myanmar’s agricultural sector, which provides jobs for over 70 percent of the population, is $200 per year, much lower than all neighbouring countries. According to OECD, 50 percent of the farming households in the country are subsistence farmers while nearly 5.5 million, or 10 percent of Myanmar’s population, have migrated to other countries to work in mostly labour-intensive industries.

“The government has begun preparations to implement the national export strategy. Corn exports have increased to over 2 million tonnes last year from a few hundreds of thousands of tonnes in previous years. But a major hurdle for the agriculture sector is lack of high-quality varieties of crops. This should be addressed with the help of international experts,” Dr Maung Aung, an advisor to the Ministry of Commerce, told Myanmar Business Today.

Myanmar’s businesses also need to commit more funds and resources in building the capacity of their employees as the employees usually have to learn from their own experiences after they enter the workforce, OECD reports.

In the manufacturing sector, the main factors hampering business development are corruption, a lack of technology and poor access to land and office space, according to the report.

Resolving ambiguity over land rights, improving infrastructure and reforming the financial system would help create the right conditions for the wider economy to flourish, it said.