FDI into Myanmar Set to Triple 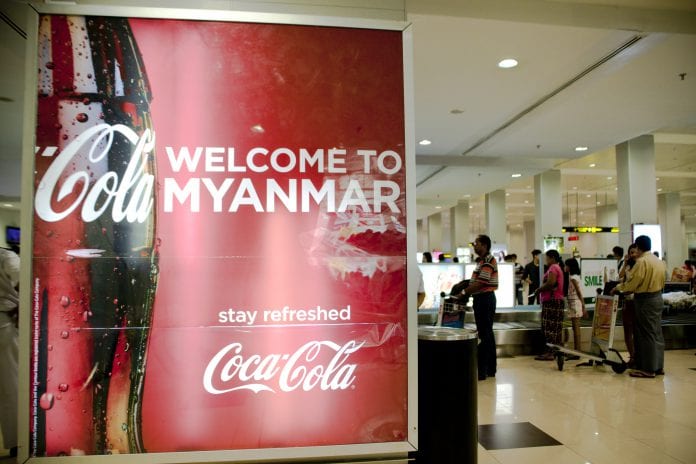 Contracted foreign direct investment (FDI) in Myanmar reached $3.6 billion in the first 11 months (April-February) of the fiscal year 2013-14, according to official figures.

FDI in Myanmar amounted to $1.4 billion in the fiscal year 2012-13, which means Myanmar could triple FDI inflow when the current fiscal finishes in March.

Fifty percent of the total FDI flowed into the manufacturing sector while 20 percent went to the telecommunication sector, said U Aung Naing Oo, director general of the Directorate of Investment and Companies Administration (DICA) under the Ministry of National Planning and Economic Development.

He said there were no short-term foreign direct investments in Myanmar, as a new law on FDI requires a timeframe of at least 20 years.

Myanmar enacted a new foreign investment law in November 2012, replacing the over-two-decade-old similar law in a bid to further attract foreign investment. Myanmar was shunned by the West during the military junta rule from 1988 to 2010, and economic sanctions made it harder for the former-pariah state to receive significant FDI. Most of the sanctions were dropped in 2012, as President U Thein Sein embarked on a series of political and economic reforms since he assumed office in 2011.

“More special economic zones will be built to make it convenient for foreign investors to invest in the country,” U Aung Naing Oo said.

In 2014-2015 FY, foreign banks will be allowed to operate in Myanmar, which is expected to up the FDI inflow more, a Central Bank spokesperson said.

Myanmar received over $1 billion in FDI in the month of January alone with Singapore as the top investor, followed by Hong Kong, South Korea and Japan. Those countries invested most in the garment, manufacturing and beverage distribution sectors, as well as communication. January’s bump in FDI was driven by natural gas, petroleum, hotels and tourism, and marine sector investments, DICA data shows.

Singaporean companies have been expanding their investments in sectors such as energy, construction, hotels and tourism, agriculture and industrial sectors, making it the largest foreign investor in the country in 2013, according to DICA.

The Myanmar Investment Commission allowed a total of 13 foreign investments in January. Of those, three companies are from Singapore and Hong Kong, two from South Korea and Japan and the rest from China, Thailand and the United Kingdom.

As of December last year, the total amount of foreign investment was $44.2 billion.

“Hotels and tourism sector is receiving a lot of foreign investment and we expect this sector to receive more in the coming fiscal year,” entrepreneur U Thant Zaw said.