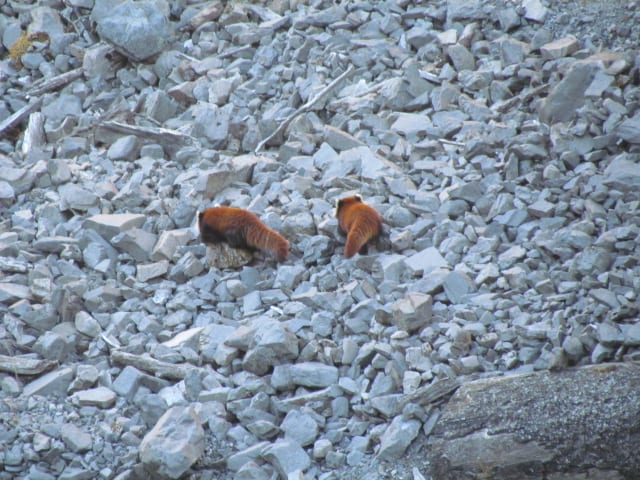 Scientists have shot Myanmar’s first wild film footage of one of the world’s most endangered species – the red panda.

A team of British nature conservation group Fauna & Flora International (FFI) biologists captured footage of the rare red panda in the wild – the first caught on film in Myanmar.

The panda couple were caught roaming the high altitude mixed bamboo and conifer forests of the Imawbum mountain range, in the country’s far north-east, FFI said in a statement.

The footage shows a pair of red pandas crawling slowly on a rocky landslide caused by Chinese logging up to the ruined forest to feed on bamboo leaves.

The brief clip highlights how threatened the habitat of this rare species is. Chinese companies are not only destroying the delicate alpine forest, but are also opening access roads for hunting and wildlife trade fuelled by Chinese demand, FFI said.

“When we encountered the two red pandas, we felt two emotions at the same time; incredibly happy for the direct sighting and for obtaining this first exciting footage, but terribly saddened seeing the state of their habitat and threats to the species’ survival,” said Saw Soe Aung, FFI’s field biologist who captured the couple on film.

Imawbum, in the far northeast of Kachin state, seems to be a hot spot for red pandas, FFI surveys have documented a very high density, unlike in other parts of the Burmese Himalaya, where the species is very rare. FFI’s camera traps have captured the presence of red pandas throughout the Imawbum mountain forests during all field surveys – from when they first began in 2009, until today.

The red panda (Ailurusfulgens) is listed as Vulnerable on the IUCN Red List, with fewer than 10,000 mature individuals estimated to survive in the wild, endemic to temperate mountain forests of the Eastern Himalayas ranging from Western Nepal to China.

Hunting and wildlife trade, alongside accelerated deforestation caused by illegal logging are the main threats for the species in Myanmar. FFI’s Red Panda Conservation Programme started in 2012 in response to these threats.

The programme is working to increase awareness amongst local indigenous people for the protection of the species, while supporting the Myanmar Forest Department to designate a new protected area, Imawbum National Park.

The Myanmar Forest Department and FFI are planning to complete the consultation with local communities to finalise the proposed park boundary before the end of this year.

This would give the species legal protection, but it is unlikely that hunting and logging will stop immediately. Nevertheless hunting has already declined since FFI facilitated local indigenous Law Waw and Lisu communities to establish a community-managed no-hunting zone and employed community rangers for its protection.