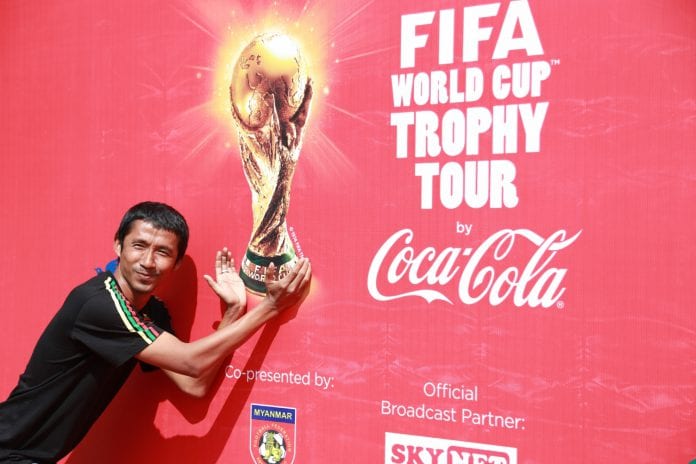 A piece of history was created on Christmas Day as the FIFA World Cup Trophy arrived in Myanmar for the first time. The special Trophy Tour plane touched down at Yangon International airport in the morning and then the trophy was whisked to an unveiling ceremony at Thuwanna Stadium.

The FIFA World Cup Trophy Tour stop in Myanmar was organised by Coca-Cola with the cooperation of the Myanmar Football Federation (MFF) and is part of a tour spanning more than 92,000 miles, or the equivalent of making 79 round-trip flights from Yangon to Myitkyina.

Myanmar is the 53rd stop of the FIFA World Cup Trophy Tour leading up to the 2014 FIFA World Cup and is one of 51 countries that have never had the opportunity to host it before.

“Today is a special day. It is the first historic visit of the world cup trophy. In addition, today represents a tangible embodiment of the positive journey that is underway in Myanmar,” said Rehan Khan, managing director, Coca-Cola Myanmar.

“This tour will help bring football fans across Myanmar closer to the greatest prize in the world of football. The FIFA World Cup Trophy Tour is the ultimate ode to the glory of football and we are proud to be associated with this initiative,” U Bunny Tin Aung, general secretary, Myanmar Football Federation, said.

The second day of the trophy tour – ‘The Fan Day’ – was filled with fever pitch excitement. Between 10am and 10pm, thousands of fans descended upon Thuwanna Stadium to have a glimpse at the solid-gold trophy.

The highlight of the Fan Day was undoubtedly the viewing of the World Cup trophy up close and taking home a personalised photo. There were photo opportunities with the 2014 FIFA World Cup mascot, who is travelling together with the trophy as part of the global tour. During the latter part of the day, Sai Sai and Bobby Soxer, brand ambassadors for Coca-Cola in Myanmar, performed a mini-concert together with other local performers.

“Coca-Cola is proud to connect the football-loving people of Myanmar with the global journey of the FIFA World Cup Trophy Tour. The passionate reception and positive energy from consumers today is a testament that Myanmar is indeed part of the global stage,” said Rommel Fuentebella, director of marketing, Coca-Cola Myanmar.

“As a football fan who has only been able to watch the FIFA World Cup on television, it was a very special moment for me to get up close to the real trophy. My friends and I have never experienced an event such as this,” said 20-year-old Sai Thura Soe, who attended the Fan Day with his friends.

The current FIFA trophy cannot be won outright, as the regulations state that it shall remain in FIFA’s own possession. It is 36cm high, made of solid 18-carat gold and weighs 6,175 grams.

The base contains two layers of semi-precious malachite while the bottom side of the Trophy bears the engraved year and name of each FIFA World Cup winner since 1974.