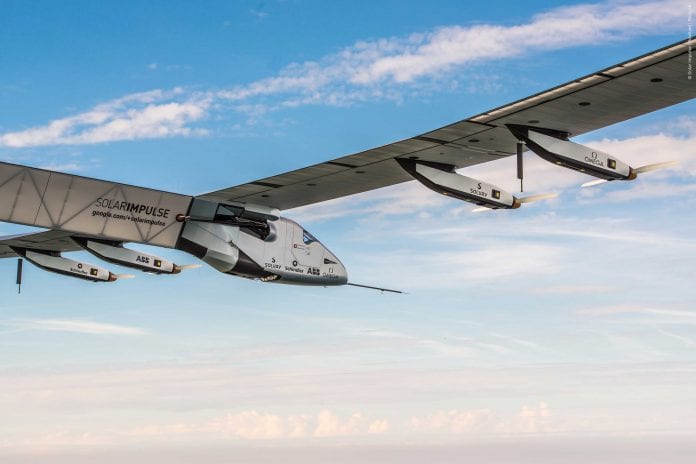 A plane powered by the sun will attempt an unprecedented flight around the world in February, the project’s founders said, seeking to prove that flying is possible without using fossil fuel.

Solar Impulse 2 is set to take off from Abu Dhabi with stopovers in India, Myanmar and China before crossing the Pacific Ocean and flying across the United States and southern Europe to arrive back in Abu Dhabi.

On its five-month journey of 35,000 km (22,000 miles), the engines will be powered only by solar energy. The two Swiss pilots, Bertrand Piccard and Andre Borschberg, will take turns at the controls in the tiny cabin for five consecutive days and nights in the air.

“Miracles can be achieved with renewables such as solar power. We want to show we can fly day and night in an aircraft without a drop of fuel,” Piccard, the project’s co-founder, told reporters on the sidelines of the World Future Energy summit currently underway in Abu Dhabi, capital of the United Arab Emirates.

At speeds between 50 and 100 kilometres per hour (31-62 mph) Piccard and Borschberg aim to circle the globe flying about 25 days over a total of about five months.

An earlier version of the plane was the first solar-powered aircraft of “perpetual endurance” to fly “day and night without a drop of fuel,” according to its website, thanks to advanced solar cells that charge light-weight lithium batteries.

The batteries are able to store enough energy to allow the plane to fly long distances at night. Developers say Solar Impulse 2 takes what engineers learned from its predecessor and pushes it a step further.

With just one seat, designers acknowledge Solar Impulse 2 isn’t commercially practical. But that’s not the point. Instead, engineers aim to demonstrate the possibilities of solar-powered aviation and to promote clean-energy technology.

“It is not the first solar airplane, however it is the first able to cross oceans and continents,” he said.

Piccard said of the challenge: “It is simply the unknown. It is a question of technical reliability, of human weather and it is the challenge of discovery.”

If something goes wrong, they will build another aircraft and continue the journey, he said.

Three ABB engineers have joined the Solar Impulse team. Their work includes improving control systems for ground operations, enhancing the charging electronics for the plane’s battery systems and resolving obstacles that emerge along the route. (Agencies)