First US Law Firm Aims to Rope in American Investors 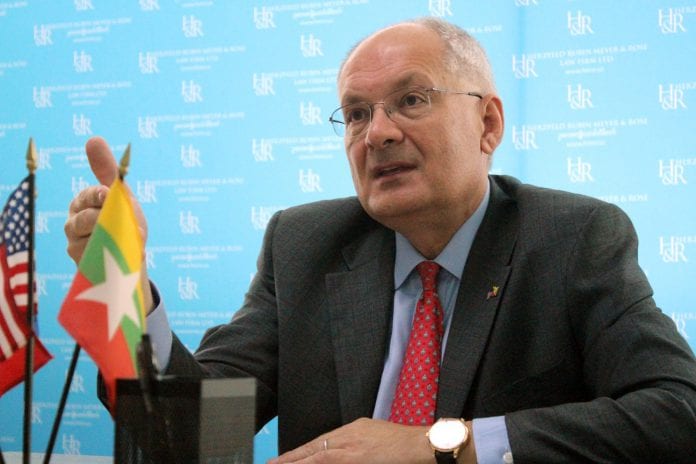 “We have planned to set up our firm for a long time.” It took a while for Rose to get the office up and running but now HRMR boasts state-of-the-art communication facilities with fibre optic internet connection and multiple phone lines, and uninterrupted power supply, which Rose says will allow the foreign clients to communicate with HRMR as they would with their local facilities.

Rose’s perseverance paid off. Following a long, meticulous process of incorporation and office space hunting, in July HRMR became the first US investor in the professional services industry to hold a 100 percent foreign ownership interest under the new Foreign Investment Law (FIL).

“This [office] is 100 percent funded by Americans which is an exception to the FIL. But we got that approval from the Myanmar Investment Commission.

“We are applying the American Bar Association’s ethics standards. We are the only office that does that, to my knowledge. We are also offering an American style of practice,” he said.

HRMR is going to focus on six areas of law: investment, intellectual property, real estate, construction and infrastructure, trading and wealth management. Rose said HRMR’s practice areas are directed to help foreign investors come into Myanmar in an effective way, and also to help Myanmar in its further development.

“Myanmar hasn’t been shown and allowed to pursue the path of development and progress because it was in self-isolation for such a long time, and that’s where H&R can help, using its attorneys’ history of helping develop legal frameworks in several emerging and frontier economies around the world.”

Rose sees a lot of similarities between the 1990s Eastern Europe and Myanmar. In 1995, H&R opened the first American law firm in Romania, and subsequently set up chambers of commerce in Romania, Moldova and Montenegro, among other countries. It also helped write several laws in those countries and brought the very first American investors there, a feat he wants to emulate in Myanmar.

“So many things that are happening here have happened elsewhere [in other countries] before, and HRMR can utilise the same experience.”

Rose, 58, was born in Romania and eventually got expelled from his own country because of being a “student radical”. He lived as a political refugee in France, and later got his law degree and higher education in America, where he settled in the 1970s.

For over 25 years, Rose has concentrated his practice in the global aspects of business development including mergers, acquisitions, privatisations, technology transfers and antitrust counselling. He served in several senior in-house counsel positions at leading companies such as American Standard, Tyco Toys and John Deere, and led M&A and other complex transactions in the US and more than two dozen countries on five continents.

Lifting all boats at the same time

Rose said helping the Myanmar business community to export their products to the US is equally important togetting US investments into Myanmar – a process he calls “lifting all boats at the same time.”

In 2002, Myanmar exported 75 percent of its garments to the US. When the sanctions hit the former pariah nation, more than 300 factories were closed and 85,000 people, mostly women, lost their jobs, essentially affecting about almost half a million people.

Rose says Myanmar can now reverse the situation and create jobs at a time when there are safety issues clouding Bangladesh, the second largest garment manufacturer behind China; prices of garments from China are skyrocketing because of surging labour prices; in Cambodia, which is the fourth largest, there are capacity issues.

“Myanmar comes with everything – it has the land, the resources and an easily trainable, educated workforce. The garment industry has a tremendous potential here.”

Furthermore, Myanmar’s energy woes, the biggest obstacle in the way of kickstarting Myanmar’s manufacturing industry, is easily solvable, Eric says, albeit it will take some time.

“The renewable energy potential in Myanmar is huge – you have hydropower, wind and solar energy, plus the tenth largest reserves of natural gas.

“Under the previous government most of the reserves were being exported but now Myanmar usage has to be a priority.”

Myanmar is not only wealthy from a resources point of view, many individuals have wealth which can also be used and protected to the holder’s advantage. HRMR’s wealth management practice is specifically directed at the upper echelons of the citizenry. “About five percent [in Myanmar] areconsidered to be rich, about 10-15 percent is middle class. A lot of people have money, but most of them put it under the mattress. They are not using it for the benefit of Myanmar…or, necessarily, themselves,” he said.

The government also recently announced that it has about $7 billion outside Myanmar, and Rose says this enormous amount of money, which is not being deployed at this point, can change the game. He says Myanmar can develop a national fund like Norway, which developed almost a trillion-dollar sovereign fund using its own resources.

Attorneys and other professionals

Dr Andrew Ngun Cung Lian, who was educated in the US and also served as the deputy chief negotiator of the Chin National Front (CNF) in its peace negotiations with the Myanmar government, serves as managing director of the office and leads a staff of five American and Myanmar attorneys.

Also, U Kyaw Hoe, one of the leading civil and criminal litigation experts in Myanmar and a member of the National League for Democracy (NLD) party’s Central Committee, heads HRMR’s litigation practice. He has represented Daw Aung San Su Kyi and U Nyan Win, secretary-general of NLD, and acted as NLD’s spokesperson.

Rose said one thing that distinguishes HRMR from other law offices in Myanmar is that it currently doesn’t have any ex-government employees.

“I know it’s an advantage. Because we can discuss matters both with the government, as well as the opposition, we are not biased in any way.”

The peace process and reforms

Rose says the current Myanmar government can be seen to have good intentions and sincerity about establishing peace and equality among all the ethnic groups in the country.

While Rose agrees that long-lasting peace hasn’t yet been achieved in Myanmar, this is where the country has been heading for the last two and a half years.

“This is why we came here, because we can see an actual change going on. We decided to put our money in because we think this is a place where we can actually help.

While Rose says he would not be bold enough to advise the Myanmar government on how they should be reforming their constitution, he said exactly what the changes should be is for the Myanmar people to decide.

“In a democracy you have to have a process where everyone can participate equally. Look around the region and I can’t name one government that fully abides by that rule. So I’m not saying, ‘do what others do.’ This has to be a Myanmar solution, reached by the Myanmar people and through Myanmar means.

“Until now you couldn’t even have everybody at the table. You have to resolve a lot of issues in a very short period of time, which is exactly whatthe government is doing.”

Where the buffaloes roam

American conglomerates and investors have been seemingly tepid in riding the wave of investments in the changing Myanmar, while Japanese investors are extensively getting involved in the Southeast Asian nation’s rebuilding process. With the flurry of Japanese multinationals ranging from automobile to IT giants, the Japanese investment figure is somewhere around $20 billion, Rose says, and points to some factors why the US investors are still not here.

“This country has been closed for so many years, and now you have to explain to people not only where it is, but what it is. The American banks still haven’t gotten the message that the US government has suspended the sanctions and many banks still refuse to deal with Myanmar. We are working with the US State Department and Treasury trying to send the message across.”

Rose said one key element behind the cautious approach taken by the US investors is Thailand, which has a large, well-established American chamber of commerce.

“Thailand is one of the seven countries that have a bilateral treaty with Myanmar guaranteeing investment. So in many cases American businesses are starting from Thailand, and they are moving slowly into Myanmar. Sometimes you’ll find the product but you will not find substantial investment.”

He said when the demand for their products will get sufficiently high, the US companies might eliminate middlemen in China, India, Malaysia or Thailand and make the capital investment over here.

Rose said the US government is already helping and US businesses now just have to come here.

“Unilever is building a factory, Nissan is also building a car manufacturing plant. At some point the Americans are going to say, ‘what do these guys know that we don’t.’ Business is business.”