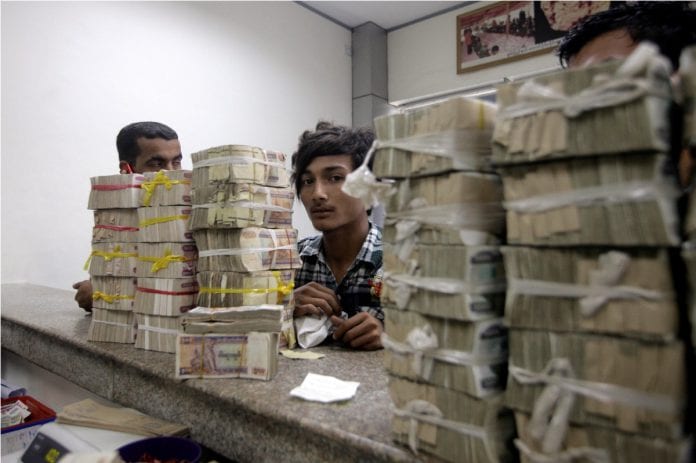 Tax reform may not be sexy, but Myanmar’s fledgling market economy is in desperate need of fiscal consolidation. A combination of well-intentioned reforms and some unsavoury legacies of the old military regime have left public finances in a precarious position. If the current methods of public financing are not restructured quickly, a debt crisis is a real possibility.

At present, Myanmar’s public debt as a percentage of gross domestic product (GDP) is officially estimated at 45.7 percent, hardly an extraordinary figure by global standards. Even a developing country such as Myanmar, with its long history of instability and economic mismanagement, could maintain the good graces of global capital markets if public debt remained at this moderate level.

However, the future expected stream of government revenues and a tax-to-GDP ratio of only 3.22 percent (excluding natural resource revenues) has many Yangon-based investors apprehensive about the fiscal future. There is growing concern that the rents on which public debt has so far been kept at bay are unsustainable. Unless the present system of tax and spend is reformed and regularised, Myanmar’s credit rating will start to sink.

The biggest worry for Myanmar’s finances is its heavy dependence on revenues derived from natural resources. Thanks to a rich endowment of natural gas, oil, jade, precious gems, and teak, government budgets have become increasing reliant upon foreign export earnings.

Gas sales alone account for an estimated 15 percent of GDP. While these revenue streams are at present strong, they provide only a temporary safeguard against mounting public debt. The volatility of resource revenues, as well as their finite nature, demands a rethink of taxation and public financing strategies.

So how can investor fears be allayed and public finances better managed? It is a question with multiple answers, few of them easy and hardly any of them popular. But President Thein Sein and his ministers cannot afford to wait: even the slightest hint of a debt crisis will lead to a quick drying up of the existing trickle of foreign investment.

In the 18 months remaining in Thein Sein’s term, the army general turned civilian president must identify achievable, reasonable changes to ensure fiscal stability in the medium term. Simultaneously, he must sustain the reformist momentum which has so far defined his administration – as well as continue the longer-term projects, many of them necessarily costly, aimed at improving national productivity.

The first reform that could be undertaken before the 2015 election is a review of the 2012 Foreign Investment Law. Introduced with lukewarm approval from the international community, the law provided a much-needed legal framework for foreign firms investing in Myanmar. To encourage foreign businesses, however, an overly generous provision stipulates that foreign investments are tax free for the first five years.

Unsurprisingly, local firms have cried foul. The playing field was altered further with the passage of the Myanmar Citizens Investment Law in July 2013. The current arrangement is certainly fairer but also short-sighted. Now, both local and foreign firms have no tax liability for the first five years of their investments, with the possibility of an extension thereafter. For a country with no consumption taxes and a rarely enforced income tax system, the amended foreign investment law is future fiscal suicide.

Another achievable reform would be the introduction of greater transparency within the cabinet. Unlike most countries, government revenues in Myanmar are not centrally collected and accounted for by the Ministry of Finance. Rather, profits from state-owned enterprises (SOEs) involved in the mining of gems, exploitation of oil and gas, running public utilities and undertaking industrial farming are first collected by the Ministry of Mines, the Ministry of Oil and Gas and so on.

The relevant ministers are then authorised to allocate the spending of these revenues, passing on the remainder to the Internal Revenue Department. The lack of oversight is overt and contributes to Myanmar’s perennial abysmal position in global corruption rankings. Certain ministers in the previous junta are suspected of directing millions of unaccounted for dollars towards family and crony businesses through their powerful positions, draining national coffers for personal gain.

To avoid a future fiscal crisis, and for the sake of justice and efficiency, cabinet protocol must be reformed. Centralised control of public finances should be asserted, the estimated thousands of other ministerial accounts must be put on public record, and SOEs must be liable to same rules and taxes which apply to privately run firms.

To be sure, such a transformation will take time. But a simple publishing of each minister’s budgets, the contracts they undertake with outside firms and the profits made by individual SOEs would go a long way towards improving governance. Recent tentative steps towards joining the Extractive Industries Transparency Initiative are a positive step in the right direction.

Investors need incentives to put capital into Myanmar; they also require financial stability. While tax holidays are inviting and may momentarily attract the interest of foreign capital, a debt crisis would quickly send investors towards the exits.

Recent surveys show that inadequate infrastructure is the most pressing concern of potential foreign investors in Myanmar. The country clearly needs new and better roads, more power, and new and expanded ports to sustain long-term investor interest. Greater transparency and a more reasonable taxation system would secure public finances and curb the risk of future default and investor flight.