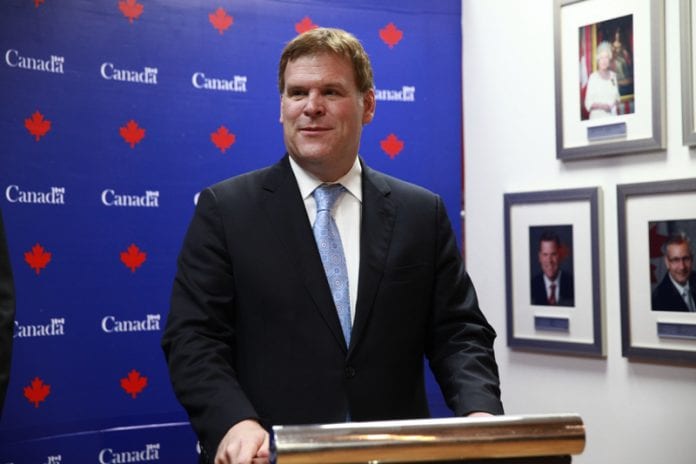 The Canadian embassy will be offering consular services, and will also play a role in strengthening relations between Canada and Myanmar, particularly with respect to the promotion of human rights, the Department for Foreign Affairs, Trade and Development Canada said in a statement.

“Today is a historic landmark in the relations between our two countries,” said Baird.

“The official opening of this embassy is literally a concrete expression of the importance that we attach to our renewed relationship with this country.”

“Our engagement brings to bear diplomacy, trade and development, and I look forward to seeing progress in these areas.”

Canada suspended some sanctions against Myanmar in April 2012 – following Baird’s landmark visit a month earlier – in response to sweeping political and economic reforms carried out by President Thein Sein since assuming power in 2011.

During the ceremony, Baird announced that Canada will provide new funding to local organisations to promote freedom of expression, peace efforts and democracy and the rights of sexual minorities.

Baird, who was in Myanmar to attend the ASEAN-Canada Ministerial Meeting, said the International Development Ministry of Canada has recognised Myanmar as a major country for its international assistance program.

The Canadian government will also contribute $50,000 to the Open Myanmar Initiative (OMI), which promotes the right to information, engages citizens in the parliamentary process and supports former political prisoners, and will give $10,000 to support PEN Myanmar in its work both to promote freedom of expression and to make citizens more aware of speech that can incite intolerance.

In a bid to support lesbian, gay, bisexual and transgender rights, Canada will provide $10,000 to Equality Myanmar and Colours Myanmar to fund a series of public education and legal awareness events this year.

Canada and Myanmar established diplomatic relations in 1958, but the Canadian embassy was stationed in Thailand ever since. The North American country downgraded its relations with Myanmar in late 1988 and imposed economic sanctions, barring trade with Myanmar and banning visas for the then high-ranking military officials.

Trade between the two countries is low, about $4 million annually, according to official figures. Myanmar exported mainly agricultural products to Canada and imported construction materials from Canada.

Canadian investment in Myanmar amounted to $41.88 million in 16 projects as of June, according to Directorate of Investment and Companies Administration. Canada helped Myanmar build the Thaketa Bridge in southern Yangon city and Yangon Paediatric Hospital in the 1970s.