Food Delivery Business in Yangon – Is It Viable? 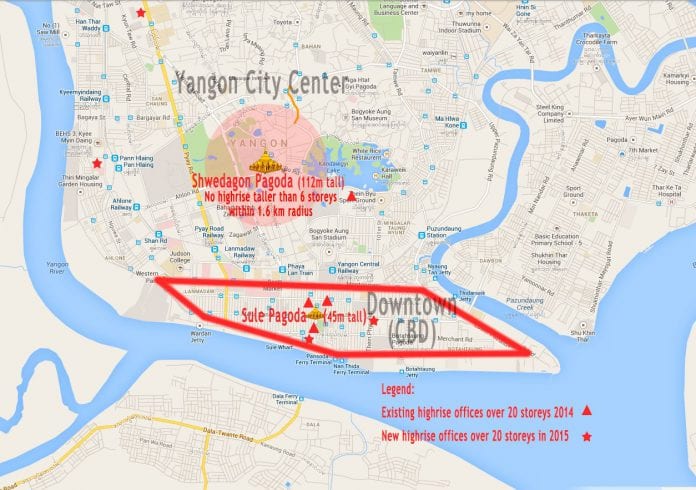 Now that the monsoon season has started in Yangon it might be easier to eat-in during lunch or dinner time. Unfortunately, for Yangonites who are trying to avoid getting drenched during the wet season, few restaurants offer delivery and there are little to no choice when it comes to food delivery services that are of comparable convenience and efficiency to Shanghai’s Sherpa Food Delivery Service or Bangkok’s Food Panda that deliver food from your favourite restaurants to your home or office. Even when you are living or working in downtown Yangon it is a challenge to get food delivered to your home or office during lunch or dinner times. Why is this case? This article seeks to answer just that.

We define food here to be Western food whose cuisine does not originate from Myanmar. So that would include burger and pizza joints, European, Mexican or Thai food.  We do not include local Myanmar street food as many expatriates have a problem eating food from these places due to poor hygiene.

To give you some perspective as to why it is so challenging to deliver Western food to your home or office in Yangon – see the map in Figure 1. Yangon has a population of over 5 million people. Geographically Yangon City is situated at the mouth of the Yangon River and sandwiched between the confluences of two smaller rivers.  Yangon City itself is very small – at its widest point it is about 30km across and it is roughly 15km high from Yangon Airport to Yangon downtown area which is at the mouth of the Yangon River. It is in the downtown area in this very thin sliver of land that you have many colonial buildings that were built in the early 1900s and are heritage buildings that contribute to the character and poor infrastructure of Yangon City. See the population density map in Figure 2 – most of Yangon’s population are cramped into the southern half of Yangon itself which includes the city centre and downtown areas. This area has poor infrastructure such as old dilapidated buildings, roads, traffic lights, parking and drainage due to 50 years of under-investment. As many buildings were built during the colonial era where there were not many automobiles – buildings were designed to have little to no car parking facilities. Given the growing car population and lack of parking space – most vehicles have to park along narrow side streets – thereby contributing to the traffic congestion in downtown. As many of the buildings in downtown and city centre are heritage buildings they cannot be knocked down or renovated without the permission of the Yangon City Development Council – thereby contributing to the slow progress in modernising the architecture and infrastructure of the Yangon city itself.

Yangon’s City Centre itself is defined by its famous landmark the 112-metre Shwedagon Pagoda.  The Shwedagon is believed to be over 2,500 years old and is the most sacred Buddhist pagoda in Myanmar. In order to reduce visual pollution around the Shwedagon Pagoda and to maintain its cultural characteristics – within 1.6km of the Shwedagon there can be no high-rise that are taller than six stories or block the view of the Shwedagon from major thoroughfares. Even condominium developments that are less than six stories but have ultra-modern design are not allowed near the Shwedagon as several foreign developers have found out too late to their grief. At the same time townships around the Shwedagon cannot have highrise that are taller than 160 metres that reduces the dominance of the Shwedagon as a landmark in that area. These height restrictions severely reduce the number of highrise buildings in the city centre and thereby reducing the density of offices and homes in the city area. In the downtown CBD area you have the smaller Sule Pagoda with a height of 45 metre. Similarly buildings close to Sule Pagoda are not supposed to tower over it. Older high-rise such as the CenterPoint Towers that were built 20 years ago has managed to escape that restriction but newer developments in the CBD area will have to contend with this requirements. 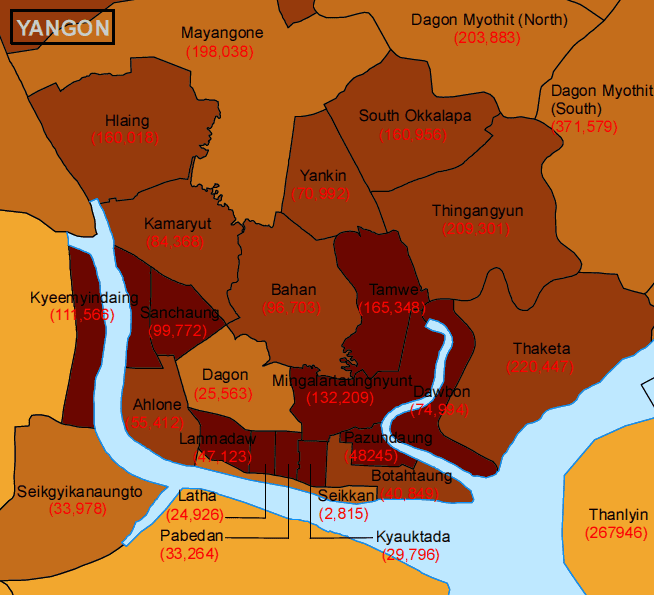 To make matters worse for the food delivery business – there is a ban on motorcycles in the city itself. Motorcycles have been banned from the city since 2003. U Myo Lwin, deputy director of the Road and Bridges Department of Yangon City Development Committee, said that the rule will continue indefinitely. It is said that motorcycles were involved in many accidents and criminal activity before the ban was introduced in municipal Yangon.

Many restaurants will offer food delivery to loyal customers and others on a case by case basis. However, a majority will not actively advertise or offer a delivery service or hire staff dedicated purely to facilitating delivery. Those who had tried delivery in the past explained that it was too troublesome and costly. They complained that they were overwhelmed by delivery orders during busy lunch hours and deliveries were often delayed due to traffic congestions and compounded by the no motorcycle rule.

See the red triangle symbol in Figure 1 which indicates the number of office buildings over 20 stories. There are only four buildings with over 20 floors in Yangon. These are Sakura Tower (20 floors), Shangri La Residence Tower (20), Traders’ Hotel (22), and Centrepoint Towers (25). From now until 2016, more than 10 are in the pipeline to be developed.

On the upside, Colliers predicts that the office market will yield an annual average size of 70,000 sqm from 2015 to 2018, totalling some 25 new upcoming office buildings. However, as there is no zoning law in Yangon which stipulates that residential building cannot be used for offices – this means that during lunch time orders for food can come from a large geographic area adding to the difficulties of delivering food without the assistance of motorcycles. In most Asian cities like Hong Kong, Singapore or Bangkok where there is a big well defined CBD area – lunch time delivery is a viable business as there is a large concentration of high-rise office blocks that restaurants or food delivery services can rely on.

Despite the expected substantial rise in office space in the years to come, the logistical problems namely traffic congestion and weak spatial concentration of offices are still the same. Colliers predicts that the new supply of office space in 2015 will reach over 60,000 sqm, more than twice that of 2014. This translates to 12 new dedicated office buildings. However, this growth is still not enough to attract food businesses to offer lunch time delivery as these new offices are broadly distributed citywide due to the poor zoning laws. See the red star symbol in Figure 1 which indicates the number of office buildings over 20 stories in 2015 – for example, Union Financial Centre (Shwe Taung Development Co Ltd) and Strand Square (Flying Tiger) are set to open in Downtown; Vantage Tower and The Office @ Novotel Yangon Max (Max Myanmar) are expected to be erected in Kamaryut Township, Inner City zone; and Uniteam Offce Tower (Uniteam Marine) and Eastern Business Centre are to be built in the Outer City zone.

Affordability is also another issue that needs to be addressed in the food delivery business. Most local Myanmar people spend less than $2 per meal while at foreign-owned Western restaurants a meal starts at $4. This would mean that for foreign-owned Western restaurants their main market would be expatriate and middle-upper income Myanmar people. This severely restricts the number of potential customers that they can attract. On top of that the number of expatriates in Yangon is still small at less than 10,000 by our estimate compared to more than 75,000 in Bangkok comprising of expats from Europe, the Americas and Australia alone and more than 250,000 expats from other Asian countries. For food delivery you need to also factor in a transportation cost of at least $2 per delivery if you are using a taxi to make the delivery in Yangon. This would deter most local Myanmar people from ordering food in Western restaurant via delivery service.  A small number of food businesses have opted to use third party delivery company Yangon Door 2 Door to deliver their food to customers. As at this report 28 restaurants have partnered with the third party delivery company. Yangon Door 2 Door delivers on behalf of these food businesses at varying costs depending on the distance needed to travel. Costs can vary between $2.9 for delivery within a township to $11.7 for cross township deliveries. A number of restaurants we interviewed voiced their concern over the high costs of using Yangon Door 2 Door as it would increase the total cost to the customers of ordering food for delivery from them by at least 50 percent.

It was observed that even if a pizza delivery business similar to Domino’s is growing exponentially in Yangon the poor telecommunication infrastructure in Yangon makes it difficult for the restaurant owner to implement a CRM system capable of automatically handling incoming calls and identify customers based on their phone number. A CRM system which most pizza shops in developed countries use can recall a customer’s name, address, order history, delivery address and provide a route map. This will greatly alleviate the work of the staff in taking orders during peak hours and lead to better customer experience and over time build a strong reputation for reliability and quality of service for the pizza delivery restaurant.

As at 2015, food delivery business is not an attractive business to be in in Yangon due to factors that we have discussed earlier. We are confident that with the help of foreign urban planning experts new towns will rise in the next five to 10 years in the areas north of Yangon, across the Hlaing and Bago rivers that envelope Yangon or at Bago region itself where the new Hanthawaddy International Airport is being built. These new towns will have the benefits of being developed from scratch and will have proper infrastructure, zoning plan which allows for modern high-rises and a vibrant and new CBD area.

For now, expatriates have two options if they want food delivered to their home or office. Firstly they can live and work near famous Western food streets such as Yaw Min Gyi area in downtown where there is a high concentration of Western restaurants and other middle to high end restaurants. If their home or office is less than 15 minutes’ walk from the restaurant – most restaurants would charge a small fee for delivery. Alternatively, if they do not want to live in the congested downtown area then their best option is to be less picky and find good local Myanmar restaurants near their home or office to patronise.

Jeramie is an MBA graduate from the University of Sydney. This article is a result of a project that Jeramie was involved in while performing his internship at Consult-Myanmar Co Ltd. Views and opinions expressed in this article are the author’s own and do not reflect Myanmar Business Today’s editorial opinion.