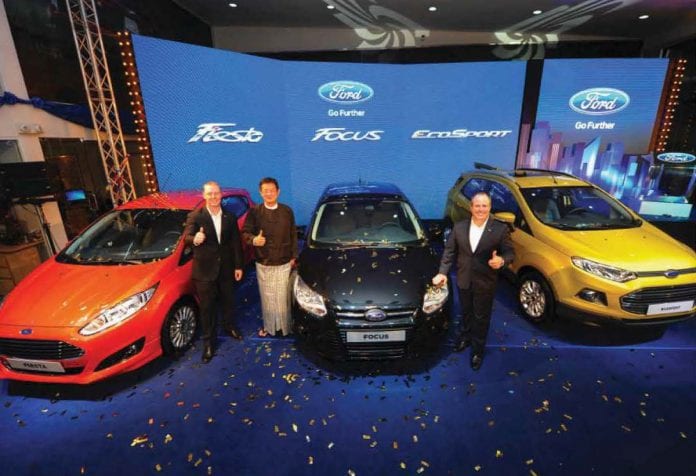 Ford’s Focus brand has been one of the world’s bestselling cars in recent years.

The Ecosport has been highlighted as the most suitable Ford for Myanmar as it can drive through up to 1.8 feet (55cm) of water.

Before allowing the import of the Fiesta, Focus and Ecosport to Myanmar, Ford tested engine oil from Myanmar in their lab in Germany, optimised the motors in its car factory in the UK and also test drove their autos for 30,000 kilometres.

“For the moment, we have only imported automobiles which will be suitable for Myanmar. We have plans to import other Ford models. Currently, most of the stocks are sold out. We imported 7 EcoSports and now all are sold out,” said U Khin Tun, managing director of Capital Automotive.

EcoSport was introduced to the Asian Market three months ago and Ford imported the automobile depending on the countries. Currently, Ford is selling its Fiesta for K30 million, Focus for K33.5 million and EcoSport for K34 million.

Ford opened a showroom in Yangon and a service garage in Hlaing townhip and will open a showroom in Mandalay in February this year.