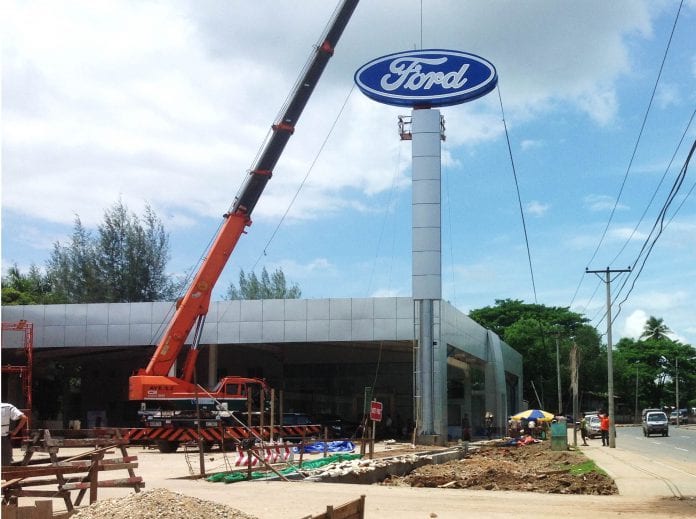 The iconic blue oval of Ford Motors became the latest world-famous brand to be seen on the streets of Yangon after the American auto giant hoisted the sign above its new showroom, due for opening in August.

Following the arrival of large multinationals including Coca-Cola and Unilever, Ford’s entry is a sign of an increase in foreign investment after the current quasi-civilian government began to take measures to attract further foreign investment.

While those investments seem to have slowed to a pace less than many expected, the continued arrival of further foreign corporations show positive signs for the future of Myanmar’s economy.

“The Ford blue oval is a powerful symbol, recognised the world over as an icon of the company that first put the world on wheels,” said David Westerman, regional manager, Asia Pacific, Ford Export and Growth Operations, in a statement.

“In this same spirit, we are now working to build a solid foundation for Myanmar’s young automotive industry, and this sign represents the beginning.”

Ford announced earlier this year it would be teaming up with local firm Capital Automotive Ltd, a unit of Myanmar’s Capital Diamond Star Group.

Ford follows Japan’s Suzuki Motor Corp as well as India’s Tata Motors Ltd in moving into Myanmar’s auto market. Ford said its entry into the country is part of its ambition to expand further in the Asia Pacific region.