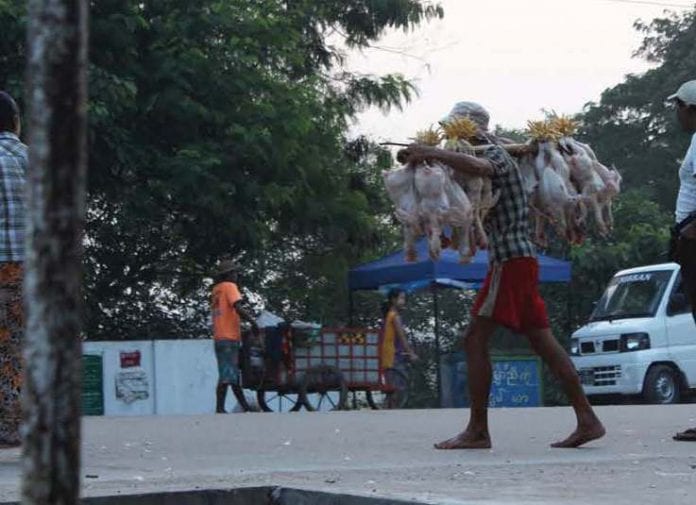 Unchecked illegal imports of eggs and hatchlings have led to glut in the poultry market, in which production capacity double demand, leading to a precipitous drop in prices in January, according to the Broiler Association.

The poultry industry reported higher profits throughout 2014 and many new investors forayed into the industry near the end of year, who also imported eggs and hatchlings from China and India, defying official import restrictions. The supply in the market has become twice the amount of consumption hurting the prices, Dr Hla Hla Thein, chair of the Broiler Association told Myanmar Business Today.

“Official poultry imports are allowed only via airplane and the total import volume is capped. But now producers have begun importing illegally form China and India to expand production, which resulted in oversupply and falling prices,” she said.

Broiler price at Yangon’s largest poultry market known as “Kyeq Bey Market” in Mingalar Taungnyunt township was K3,700 per viss (1.6 kilogram) at the start of December but the influx of chickens since mid-December has pulled down the price to K2,300 per viss.

Amid the price fall, the poultry retailers say they have to compete more and earn less, even though they sell more than before.

Chicken retail price previously fetched K5,000 per viss, but has now decreased to around K2,500 per viss since the end of December.

Daw Than Than Htwe, a chicken vendor at a wet market in South Dagon township, said that she is now able to sell twice the amount of the raw chicken but earned about the same income, meaning work efficiency has halved.

Although the price drops have been seen in the past years, it occurred first in 2015 because newcomers in the industry fail to foresee the market saturation, Dr Hla Hla Thein said. It is difficult for the poultry production capacity to stabilise as the current hike in the production will not be sustained once the opportunistic producers start taking losses, she said.

“The market was hit by price drops in 2013-14 too. But this time the plunge comes earlier than before. But the prices will return to normal during the end of February to April as those who hope to tap a windfall in the industry will not be able to sustain their operations,” said Dr Hla Hla Thein.

Before 2014, poultry prices usually dropped during the bird flu season around March, but in 2014 only the birds with disease-free certifications were farmed, keeping the prices stable.

Poultry prices usually drop at times when feed prices go up, as producers who can’t afford the premium in feed prices release their birds into the market before the normal farming cycle of 45 days is up, industry players said.