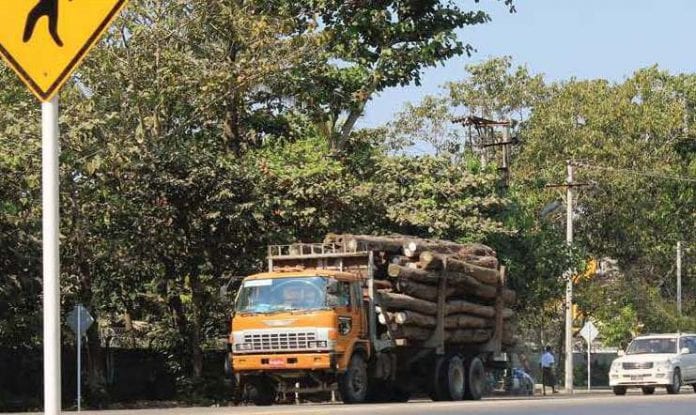 Conflicts between the government and ethnic rebel groups, and the lack of cooperation among relevant ministries are exacerbating the problem, he added.

Every year a lot of natural resources are being smuggled outside Myanmar and the country loses over $500 million in revenue because of smuggled woods.

According to a 2014 report by the UK-based Environmental Investigation Agency (EIA), $5.7 billion worth of timber were smuggled out of the country in the last 10 years.

“If we can control the smuggling of timbers we could have even settled all the international debts in 10 years,” U Tin Aye said.

Not only the forest related bodies, other departments and individuals should also participate in the fight against smuggling of timbers to protect the country’s forest as a national duty, he added.

In 2014-15 fiscal year 7,200 tonnes of smuggled teak, 12,383 tonnes of hardwood and 1,171 tonnes of other timbers were seized by the investigation division under the Forestry Department.

Throughout the four fiscal years from 2011 under the current government, 140,000 tonnes of smuggled teak and other hardwoods were seized while 22,600 local smugglers and 250 foreign smugglers were arrested, according to the Ministry of Environmental Conservation and Forestry.