France to Give €5.5m to Upgrade Irrigation Systems 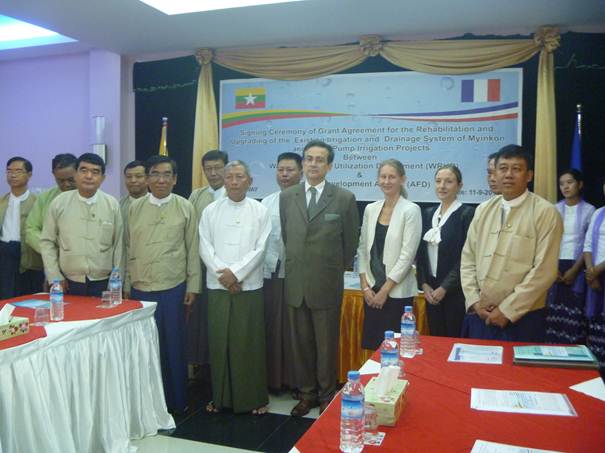 Myanmar will get a grant of €5.5 million ($7.09 million) from France to upgrade pumped irrigation systems in the countries central Magway and Mandalay regions.

The grant will primarily be used for the rehabilitation of pumped irrigation schemes in Myinkun and Kanni in Magway region as well as capacity building of the local users and administration, the Embassy of France in Myanmar said in a statement.

The agreement was signed between the Water Resource Utilization Department (WRUD) of the Ministry of Agriculture and Irrigation and the French Agency for Development (AFD).

Despite having a climate conducive to agriculture, a vast amount of land and abundant sunlight, Myanmar in the recent decades fell short of taking advantage of its agricultural resources, especially in the dry season, because of its underdeveloped irrigation facilities.

Most farmers in the country cultivate rice only once in the rainy season, leading to a decreased agricultural income for Myanmar. India and Japan had previously provided loans to improve Myanmar’s irrigation system.

With the contemplated extension of AFD interventions, four projects in Myanmar are set to get a total amount of nearly $150 million in loans in the sectors of agriculture, fisheries, and water and sanitation, the embassy said.

AFD is the implementing arm of the French Official Development Aid (ODA) policy and started operating in Myanmar in June 2012.