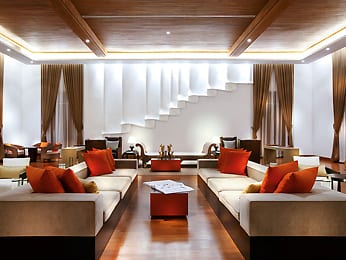 This newly-built, upscale hotel – The Lake Garden – is aimed at world leaders, dignitaries and discerning travellers that visit the country’s new capital, the French hotelier said.

“This opening comes at a time when the capital is seeing an influx of visitors with a strong demand for an upscale accommodation with international standard facilities and superb services.”

The hotel, which is five-minute’s drive away from Myanmar International Convention Centre (MICC) and 20 minutes from Nay Pyi Taw International Airport, combines lavish facilities and amenities and is surrounded by a tropical landscaped garden overlooking a lake.

MGallery hotels are usually categorised according to three themes – Signature, Heritage and Serenity. Due to its architecture amid tropical surroundings by a lake, The Lake Garden is categorised under the “Serenity” category.

Guests will be greeted at the hotel entrance by three imposing bells, a reminiscent of the Great Bell of Mingun – reputed to be the second largest bell in the world – and the inspiration behind the hotel’s logo and theme.

David Daguise, The Lake Garden, Nay Pyi Taw’s General Manager, said, “The hotel is a serene sanctuary which offers guests a unique experience through an extraordinary journey of modern Myanmar influenced by its rich, cultural heritage.”

The hotel’s interior is full of centre-pieces, such as a gigantic alms-like bowl in the lobby, Burmese paintings, architectural arched doorways and Burmese arts and visual details.

Accor claimed that the hotel’s meeting facilities are the city’s best, consisting of a conference room which can accommodate up to 250 delegates, six breakout meeting rooms for small-to-medium size functions, and two state-of-the-art boardrooms.

To celebrate its opening, Accor said it is offering a special introductory rate for the hotel, valid until October 29.