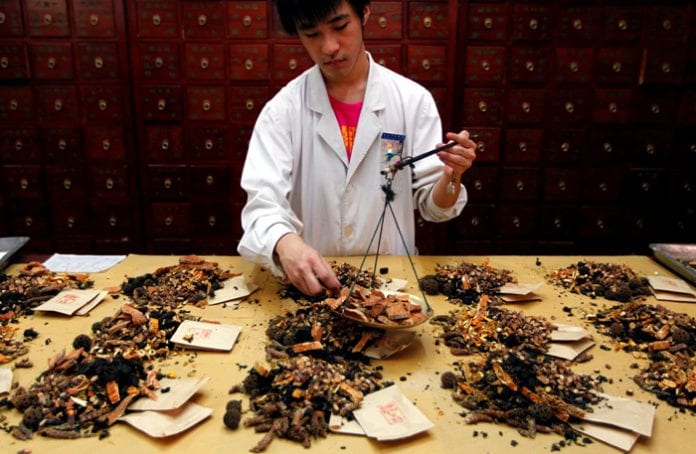 On rainy days in Jakarta, a canny street merchant like Emi can sell two dozen sachets of herbal cold cure Tolak Angin to office workers and labourers sniffling by her roadside stall.

“Herbal medicine is good for the body because it’s natural,” says Emi, who goes by only one name. Laced with ginger, cloves and mint leaves, the traditional remedy Emi sells for 25 cents apiece is also good for business: The company that makes Tolak Angin went public last month and is worth around $850 million.

Shares in PT Industri Jamu dan Farmasi Sido Muncul Tbk jumped as much as 24 percent when it became the first herbal medicine company to list in Jakarta on December 18. With Chinese peers now trading at premium prices, Sido Muncul is just the latest in a crop of Southeast Asian traditional medicine firms with big plans to grow amid strong investor interest.

Global pharmaceutical companies from Pfizer Inc to Roche Holding AG have long pinpointed Asia as a source of future growth as incomes rise. The traditional medicine market of Southeast Asia is also coiled to leap as an increasingly health-conscious middle class rises in the region.

Stacked with products that claim to cure anything from rheumatism to sexual dysfunction, the market for traditional medicine in Southeast Asia is projected to grow to $3.9 billion by 2017, nearly 50 percent more than this year, according to research firm Euromonitor International.

While the ingredients in traditional medicines may be advertised as natural and enjoy historical acceptance in Asia, they don’t meet with universal approval. Health regulators in places like Britain have warned of high concentrations of elements like mercury in some products, and conservation groups say some use ingredients taken from endangered animals.

Still, alongside the maker of Tolak Angin – ‘Repel the Wind’ in Indonesian – firms in the region including Singapore’s Eu Yan Sang International Ltd and Malaysia’s Power Root Bhd are drawing the attention of investors.

Shares in Eu Yan Sang and Power Root trade at 18.75 and 15.05 times their latest earnings, respectively. That’s far below the average of 76.38 times for a group of eight listed Chinese traditional medicine makers, according to data from Thomson Reuters StarMine.

The company, whose name means ‘Realised Dream’, began life in 1940 as a tiny business operated by Rahmat Sulistio and her three assistants in Yogyakarta, a city in the central Java region.
Over 70 years later, the company’s IPO was 11.4 times over-subscribed. At its latest trading price, its market valuation was around $850 million.

Sido Muncul has posted annual sales growth of around 10 percent on average in the last few years and aims to launch new herbal drinks, Irwan Hidayat, the grandson of Sulistio and head of the company, told Reuters. It plans to use IPO proceeds of around 870 billion rupiah ($72 million) to develop new products and increase manufacturing capacity.

“This is the industry of the future, a sunrise industry. If we talk about health, there will always be demand,” Hidayat said in an interview. “This country also has extraordinary natural resources, so the supply of raw materials is not a problem.”

Patrick Walujo, co-founder of Singapore-based private equity firm Northstar Group, said he favours consumer-driven businesses in Indonesia. “Herbal medicine products may have to be adjusted for exports, but the sector is attractive,” he said.

At Singapore’s Eu Yan Sang, Hong Kong accounted for 47 percent of revenue in the three months ended September. Singapore contributed 22 percent, while the rest came from Malaysia and Australia.

The company’s flagship products, derived from traditional Chinese medicine formulas, include Bak Foong pills for treatment of menstrual pain and Bo Ying compound, designed to help children with a poor appetite and other illnesses.

“The Chinese are now able to afford more and more expensive herbs. There is an overall worldwide interest in forms of natural wellness,” said Richard Eu, a fourth-generation family member who now heads the business.

The founder’s family are majority shareholders of Eu Yan Sang, while Aberdeen Asset Management PLC holds just over 12 percent through an Asian unit.

In Malaysia, Power Root makes Tongkat Ali drinks that it says can boost male virility. It reported profit after tax of 35.3 million ringgit ($10.9 million) for the year ended February 2013, more than double a year earlier.

Its shares have jumped more than 60 percent this year, outperforming the 9 percent rise in the broader Kuala Lumpur Stock Exchange. The company said stronger exports to markets like the Middle East and North Africa boosted earnings, and it plans to expand in Southeast Asia.

Yet the traditional medicine sector has come under scrutiny from global health regulators. Several ingredients in some medicines are alleged to contain high levels of toxins or chemicals despite being promoted as natural. In August, a UK regulator warned people not to use a number of unlicensed traditional Chinese medicines after they were found to contain “dangerously high” levels of lead, mercury and arsenic.

Some traditional Chinese medicines have also come under fire from animal rights groups as they use ingredients from endangered animals such as bear bile, crocodile penis and deer antler.

“We are asking the consumers to avoid using medicines from endangered animal parts. There are many alternative medicines which do not pose a threat for biodiversity,” Nazir Foead, conservation director at WWF in Indonesia, said in comments emailed to Reuters.

At her street stall in Jakarta’s central business district, Emi says customers regularly stock up on Sido Muncul’s Tolak Angin. White or blue collar, young or old, many claim they prefer it to cold medicines made by big pharmaceutical companies, she says.