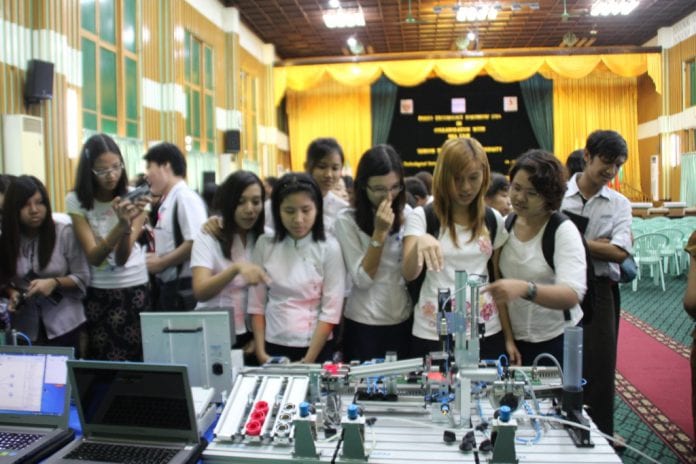 As the government embarks on industrialisation of a country that was beset by five decades of military rule, potential investors are concerned about the lack of skilled workforce in the country.

“Modern, state of the art manufacturing starts with qualified people. Only well qualified staff is able to set up, operate and maintain production facilities. Without that important prerequisite, the industrialisation of Myanmar, which is very desirable, will not be possible,” Burdin said.

The training centre, first of its kind in Myanmar, will offer short term courses in pneumatics systems, PLC programming and mechatronics to help alleviate a shortage of skilled technicians in industrial automation sector, Festo said. Successfully completed trainees will be conferred with Festo’s certificates.

“By investing in the training centre, we expect to cultivate a group of talented engineers in Myanmar, who will be able to spur industrialisation in Myanmar,” Burdin added.

“The market in Myanmar for German high tech industrial equipment may still be small. But one should not underestimate both the professionalism of top-level Myanmar entrepreneurs and the ambition and eagerness to learn of their employees,” Dr Monika Stärk of German Delegation of Industry and Commerce in Myanmar said at the event.

“Festo’s Training Centre is a great initiative in view of broadening this base and increasing capabilities of the local workforce and capacities of local industries,” she said.

The Union of Myanmar Federation of Chambers of Commerce and Industry’s Technical and Vocational Education and Training (TVET) Unit, Festo Didactic and Sea Lion also signed a memorandum of understanding for the cooperation of TVET development in Myanmar at the event.

On the second day of Roadshow, Yangon Technological University received two Modular Production Stations refurbished by Festo and Sea Lion at a cost of $5,000. YTU bought a flexible manufacturing system including the two stations from Festo in early 2000 under the OPEC loan.

Festo, an independent family company established in 1925, provides pneumatic and electric drive technology for over 300,000 customers in 200 industries worldwide. The group achieved sales revenues of over €2.28 billion in 2013-14 fiscal year, with 16,700 employees.