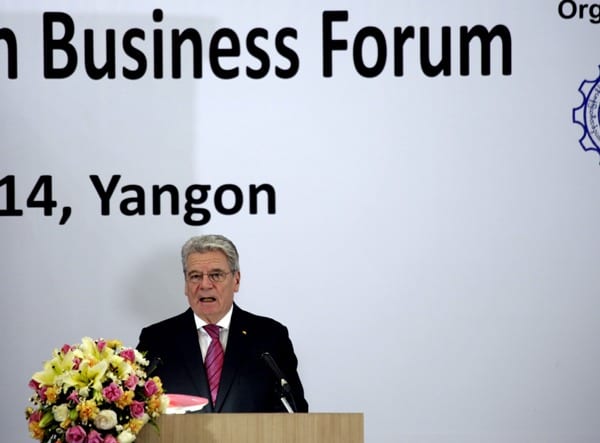 The Delegation of German Industry and Commerce has launched its operation in Myanmar in a bid to boost business and bilateral ties between the two countries.

The office will be co-funded by the Association of German Chambers of Commerce and Industry (DIHK) and the German Ministry of Economic Affairs and Energy, the Delegation said in a statement.

The German Federal President Joachim Gauck on February 11 inaugurated the Delegation together with Win Aung, president of the Union of Myanmar Federation of Chambers of Commerce and Industry (UMFCCI), and Ludwig Georg Braun, honorary president of DIHK.

“Myanmar is in a process of catching up,” said Braun. “In order to stand its ground in regional competition broad activities in qualification and concepts for productive value chains will be key. Developing an entrepreneurial infrastructure is essential in this respect. German companies can make a very valuable contribution here.”

He said Germany is the most important supplying country from within the European Union, but while there is room for development in bilateral trade and investment activities, he sees “huge potential for bilateral business relations” and encouraged taking a long-term perspective.

“German products and technologies traditionally enjoy high esteem in Myanmar. And I can see that our approach based on partnership and patience is much appreciated as well,” Braun said.

He said further development of the Myanmar private sector would be another “worthwhile topic” for bilateral dialogue.

“The whole of Asia envies our efficient and productive SME structures. Their success relies on the close cooperation with the big multinational corporations and a consequent focus on competition based free enterprise system. In Myanmar as well this concept might be a good basis for sustainable development.”

Monika Staerk, who has been following developments in Myanmar and supported German business activities since 2003, will head the German Chamber operation as a Delegate of German Industry and Commerce.

The launching took place during a bilateral a business forum with more than 150 German business representatives attending in the UMFCCI headquarters.

“German businesses want to support and participate in economic growth potentials, based on Myanmar’s geostrategic position and its wealth in natural resources. For these potentials to deploy, infrastructure and energy supply will need to be developed further with German business being in a good position to make sustainable contributions,” the Delegation said in a statement.

The forum was also attended by Brigitte Zypries, state secretary, Federal Ministry for Economic Affairs and Energy, and U Soe Thein, union minister for the President’s Office.

Zypries said she will “personally push for an investment protection deal between the European Union and Myanmar” in a bid to attract more foreign investors to the formerly-reclusive Southeast Asian state. Developing the legal framework and forming strong unions are necessary for Myanmar’s economic development, she added.

The UMFCCI and DIHK later issued a joint statement reconfirming their willingness to intensify dialogue and cooperation through further business forums and targeted platforms for business to business exchange.

The statement said that both sides will continue to “jointly work on promoting and further developing the spirit of partnership and trust, aiming at mutual benefit.”

Both sides were aware that promoting foreign direct investment will be a key for economic development and social stability in Myanmar, the statement said, adding that development of infrastructure and power supply will be a prerequisite for this.