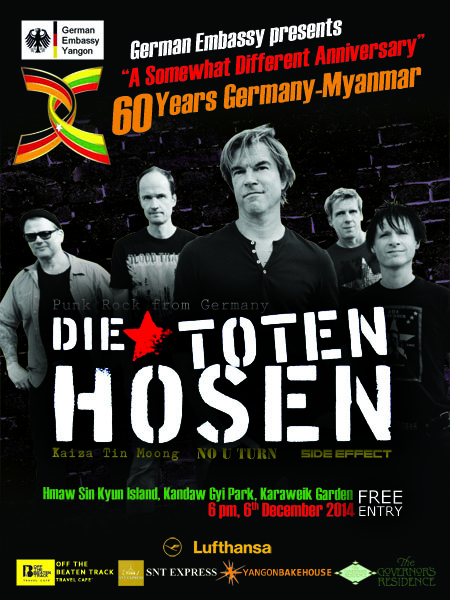 German punk rock outfit Die Toten Hosen will perform a one-time gig in Yangon at an event to mark the 60th anniversary of Germany-Myanmar diplomatic relationship, the German Embassy in Myanmar said.

The concert, “A Somewhat Different Anniversary,” is the first performance of a western rock band in Myanmar.

The event will take place on Saturday, December 6, starting at 6pm at Kandawgyi Park (Hmaw Sin Kyun Island) in Yangon. Entry is free.

Die Toten Hosen is a German punk band from Düsseldorf that has been highly successful in Germany since the 1980s.

The band’s name literally means “The Dead Pants/Trousers”. “Tote Hose” is a German expression meaning “nothing going on” or “boring”. Their name can figuratively be translated as “The Dead Beats”.