Germany Waives Half a Billion Euro of Myanmar’s Debt 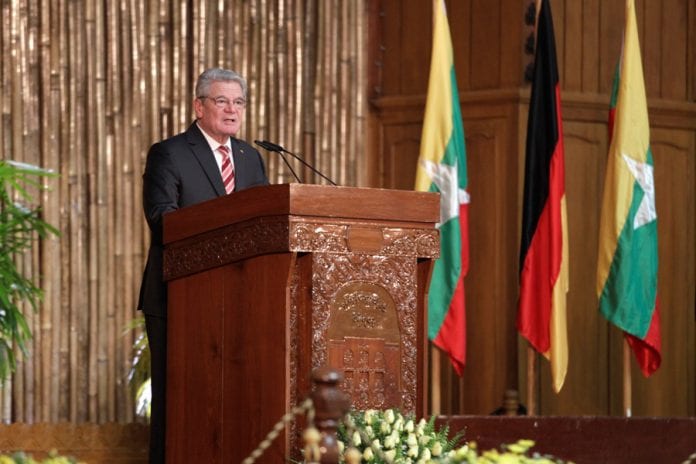 Germany has signed an agreement to slash more than half a billion euro in debt owed by Myanmar, in line with a debt forgiveness agreement the Southeast Asian nation made a year ago with the Paris Club, a group of creditor countries.

The agreement was signed on February 10 in Myanmar’s capital Nay Pyi Taw, during a state visit by German President Joachim Gauck, the first by a German head of state in 26 years, state-run media reported.

Myanmar negotiated the deal a year ago with the Paris Club, and Gauck said Germany could go ahead with its part of the deal after meeting President Thein Sein.

“A sustainable agreement has been reached allowing Germany to forgive half a billion euro of debt,” Gauck said in a speech at the University of Yangon.

Myanmar’s government said it had met the Paris Club on Januasry 25, and member countries had agreed to cancel half of the arrears Myanmar owed them in two stages, rescheduling the rest over 15 years, with seven years’ grace.

Myanmar accumulated $8.4 billion in foreign debt during the socialist regime of the late General Ne Win from 1962 to 1988, and $2.61 billion under the military junta that took over in 1988.

Last year, Japan agreed to provide a bridge loan to Myanmar to cover outstanding debt to the World Bank and the Asian Development Bank, totalling about $900 million. Norway cancelled all the $534 million owed to it, while Japan cancelled more than $3 billion, adding up to $6 billion, more than 60 percent of the total debt, the government said.

Following his meeting with U Thein Sein, Gauck met Parliament and Lower House Speaker U Shwe Mann and opposition leader and Chairperson of National League for Democracy (NLD) Daw Aung San Suu Kyi. He also inaugurated the Goethe Institute on February 11 in Yangon.