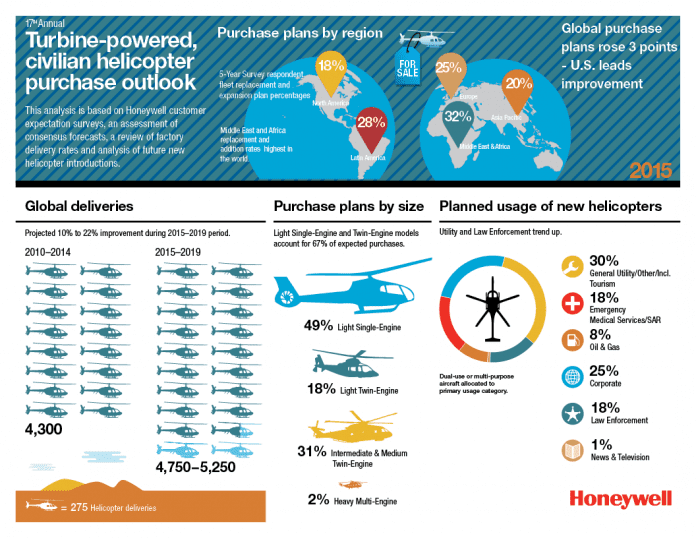 American aviation firm Honeywell Aerospace said it expects that 4,750-5,250 civilian-use helicopters will be delivered during 2015-2019.

The forecast estimates the five-year share of demand from the US and Canada at 34 percent, up nearly eight points on stronger North American buying plans. When combined with Latin America, the Western Hemisphere represents 53 percent of the five-year global demand. Europe’s share tallies 24 percent, with the Asia-Oceania region accounting for 14 percent, and Africa and the Middle East contributing 9 percent.

Operators who intend to purchase a helicopter within the next five years noted that the age of their current aircraft (which includes factors such as maintenance costs, performance erosion and safety concerns), contracted replacement cycle and warranty expiration were all key reasons for their decision. For those surveyed, make and model choices for their new aircraft are strongly influenced by range, cabin size, performance technology upgrades and brand experience.

“Purchase interest for helicopters in training, tourism, firefighting and law enforcement categories is trending up, influenced by increased utilisation rates and helicopter replacement cycles. Interest across these mission sectors is helping to sustain near-term demand. Looking ahead, several new platforms are scheduled to enter service over the next few years, also bolstering overall helicopter demand.”