HomeMMBIZ NewsGolden Letter From Alaungphaya to King George II on Display at The...
MMBIZ News 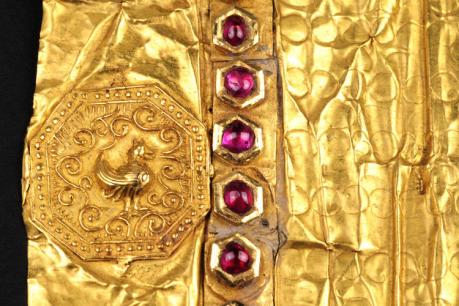 “The Golden Letter” was sent by King Alaungphaya of Myanmar to George II, King of Britain and Elector of Hanover, in 1756. Today the original is kept at the Gottfried Wilhelm Leibniz Library in Hanover, Germany.

In 1756, King Alaungphaya ordered a letter to be written on a sheet of pure gold and decorated with 24 costly rubies. The letter was addressed to King George II of Great Britain, who reigned simultaneously over the Electorate of Hanover and the Kingdom of Great Britain at the time. It was transported inside the hollowed-out tusk of an elephant, which has also been preserved. The royal missive was an offer of friendship extended to the British. Nonetheless, when it reached London in 1758, after a journey of nearly two years, it went unanswered.

George II instead had the letter transferred to the royal library in Hanover, where it remained for 250 years before its secrets were deciphered. The letter is prized among experts in Burmese culture as a unique artefact of global and colonial history. It occupies a prominent place in the collection of the Gottfried Wilhelm Leibniz Library (the Lower Saxony State Library) in Hanover. The historic document was digitised in 3D with the support of the German Federal Foreign Office and the Gottfried Wilhelm Leibniz Library. The innovative technology involved makes it possible to produce 3D projections of the digital model.

The digitised Golden Letter was handed over to Foreign Minister Wunna Maung Lwin dur- ing the visit of President U Thein Sein to Germany in September last year. For the time being the projection will be on display at the National Museum in Yangon until the new National Museum in Naypitaw opens its doors.

According to a Telegraph report, amid the valuable gems and flowery language, King Alaungphaya confirms his permission for a harbour to be built in the city of Pathein to encourage trading co-operation between the two countries. Written in Burmese script, it is addressed to “the most meritorious and supreme [king] master of all the parasol-bearing kings … lord of ruby, gold, silver, copper, iron, amber and precious stone mines, lord of white elephants, red elephants and elephants of various colours”.

It goes on to convey “kindest greetings to the English king who rules over the English capital”.

Dr Jacques Leider, a Luxembourg historian and Burma expert, said the letter was sent at a time when Burmese royal power was threatened by foreign invaders. King Alaungphaya hoped to procure guns and cannon through fostering close trade relations with Britain.