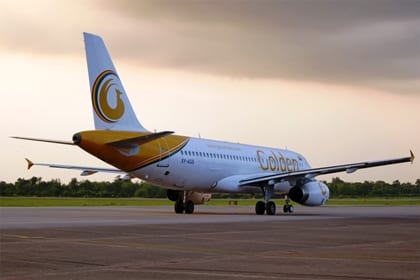 Private airline Golden Myanmar will expand its domestic and international routes with Airbus planes this month, sources with the airline said last week.
The carrier aims to capitalise on the impending tourist boost in the wake of the 40-day countdown for the 27th SEA Games in the country, which will see an increase in the arrival of visitors.
The airline will start operating to new destinations with new XY-AGT A320 Airbus planes from November 15.
Golden Myanmar will also operate a new Mandalay-Imphal chartered flight on November 21 ahead of the Manipur Sangai Festival next month, according to official media reports.
After the festival, scheduled for November 21 to 30, Golden Myanmar will operate regular flights to Imphal using A-320.
The new air route operation between India and Myanmar is part of a bilateral air services agreement signed during Indian’s Prime Minister Manmohan Singh’s visit to Myanmar last year.
Meanwhile plans are under way to operate a bus service between Imphal and Mandalay.
Golden Myanmar, established in 2012, started operating in Yangon-Singapore, Yangon-Bangkok and Mandalay-Yangon routes daily with XY-AGS A320 Air Bus since January.
Myanmar’s domestic airlines are drawing interest from international and regional aviation giants who are vying to secure sizeable shares in Myanmar’s lucrative and growing aviation market. Japan’s All Nippon Airways in September announced that it will buy a 49 percent stake at local carrier Asian Wings Airways.
A total of 24 international and seven domestic carriers are currently operating in Myanmar following its opening-up two years ago.