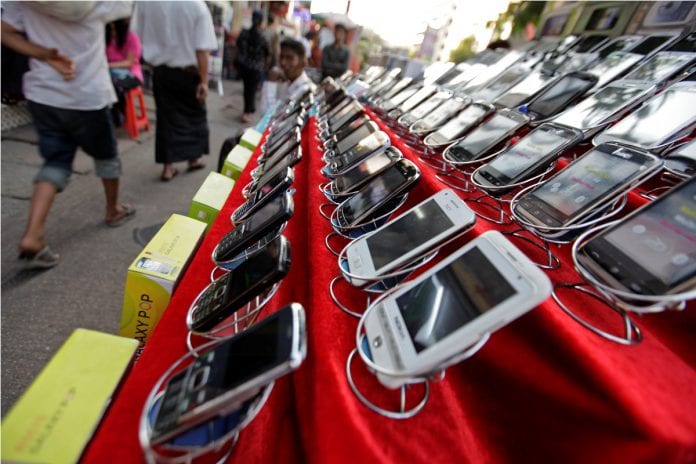 A laboratory to evaluate the technical aspects and health risks of imported mobile handsets will be established with related regulations to be set according to international standards and relevant ministerial departments, said an official from the Directorate of Communications.

After foreign telecom operators – Telenor and Ooredoo – rolled out their services late last year, mobile penetration has surged in Myanmar, prompting an influx of handsets into the market to absorb the rising demand for mobile devices.

Cheap handsets account for most of the imports so a testing facility is needed for such devices to verify their authenticity, assess their quality and detect harmful effects such as unsafe frequencies, said U Than Tun Aung, director of the Directorate of Communications.

“We are still discussing the plan. The lab cannot just be set up, and it also needs to be maintained for a long term. We will coordinate with the Communications Advisory Committee and the Standardization Committee under the Ministry of Science and Technology. The plan will be funded by the union budget as this is a union-level project,” he said.

At present, mobile handset importers have to get approval from the Ministry of Communications and Information Technology to distribute the devices locally and the authorities are considering about raising a fund for the lab from the importers.

However the authorities are worried that the dealers may relay the obligation over end users by adding the surplus charges to the sale price, U Than Tun Aung said.

The director hinted that this was a measure to tackle cell phone smuggling, saying that the authorities also need to curb the handset devices coming illegally into the market as the lab project will tighten the regulations on the legally imported products.

The effect of mobile phone radiation on human health is the subject of recent interest and study, as a result of the enormous increase in mobile phone usage throughout the world.

“Mobile phones have been widely used in Myanmar [only] for a few years. Up to this point, people confidently use them without being concerned about health issues. I don’t think there is any cancer case where they can certainly prove it is caused by mobile phone radiation, but on the other hand, it emits electromagnetic waves,” Ko Tay Zar Zaw Win, an electrical engineer, told Myanmar Business Today.

Studies thus far have not shown a consistent link between cell phone use and cancers of the brain, nerves, or other tissues of the head or neck, according to the National Cancer Institute of the United States, which added that more research is needed because cell phone technology and how people use cell phones have been changing rapidly.

“Our federation will also participate in the plan. Some handsets may have strong signal receiving ability but they can also be harmful for users. And handset models from little-known brands may need to be tested for their quality,” U Khun Oo, chaiman of Myanmar Computer Federation, told Myanmar Business Today.