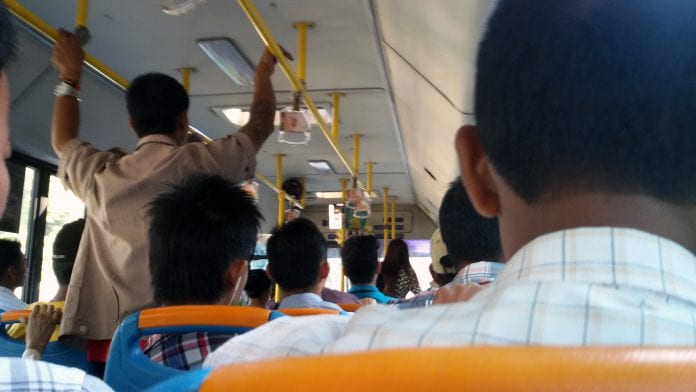 U Hla Aung, chairman of the Supervisory Committee for Motor Vehicles, Ma Hta Tha, said that the committee will try to implement a bus ticket system in Yangon.

“In order to implement a system of bus tickets, we need to know the capacity of the buses, the cost of tickets, monthly and yearly costs, and the number of vehicles. Bus line owners are currently collaborating with us to provide information, and we expect smooth implementation of the ticketing system,” U Hla Aung told Myanmar Business Today.

U Hla Aung said that the committee will collect the exact data for the number of city busses, mini busses and air-conditioned busses, running in Yangon.

“If we can implement the ticket system, there will be no more extra charges imposed by fare collectors. But we need the cooperation of all parties to implement this project,” said U Hla Thaung Myint, the vice-chairman of the committee.

Previously, the iPay (electronic ticketing) system was implemented on Parami bus route and was installed on over 300 vehicles but failed for multiple reasons.

In February, there were a total of 178 complaints to the committee and most of the complaints were about overcharging by bus drivers.

The committee said it is taking action by imposing a K30,000 fine and one-month licence supension.