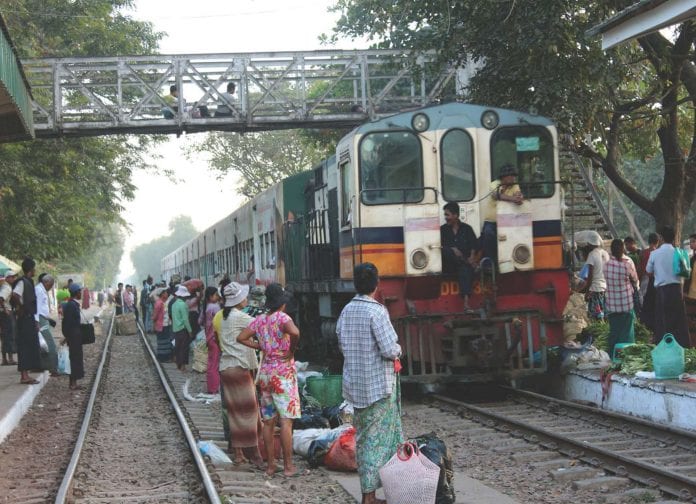 Yangon’s population is expected to nearly double in the next 20 years, and with people come increased transportation pressures on a city already straining under the weight of its 5 million inhabitants.

The Japan International Cooperation Agency (JICA) has been pushing for greater infrastructure development in order to pull the core of the city away from the dense downtown area, Masahiko Suzuki, JICA’s urban development adviser to Yangon City Development Committee (YCDC), said in an interview with Myanmar Business Today.

JICA and the Ministry of Rail Transportation finalised a Yangon Urban Transport Master Plan (YUTRA) last year, and many of the proposals to improve the transportation are underway, but many have also been shelved. The roads and railway tracks being put in now will affect the shape of Yangon for decades to come.

Yangon’s aging urban train system is a curious machine, largely shunned by the public and relegated as a tourist curiosity and conveyor of wholesale produce from markets in the north into the inner city.

While it has the potential to escape the congestion of Yangon’s streets and provide a direct link downtown, its sleepy schedule and limited routes mean that only 1.1 percent of commuters use the trains on a daily basis.

An underground metro system was suggested in the YUTRA plan, but it was not accepted by the central government, said Suzuki.

“Some people say the climate in Yangon is not suitable for an underground transport system, and construction would take too long and the cost could be remarkably high,” he said, adding, “Taking into account the increase of population and traffic in the future, a major transport system might be necessary to accommodate increased traffic and transport. I think there is no technical difficulty for a metro system to be introduced in Yangon.”

While there is no metro system in the foreseeable future, there will be some upgrading of Yangon’s circle train line, with newer trains. JICA has previously claimed a goal of 30 percent train ridership by 2020. This is held back by the limited scope of the existing train lines, with large areas of the city left uncovered, and stiff competition with widespread bus lines.

Even the urban trains have been scaled back, however. According to Suzuki, “The Ministry of Railways declined to accept JICA’s proposal and they decided to minimise loan assistance from Japan. At this time, the assistance from Japan would be limited to signalling systems and rolling stocks only.”

Suzuki said JICA has previously proposed a 70 billion yen ($560 million) upgrade for the circle line, which would involve a replacement of railway tracks and stations, many of which date back to the colonial era. However, this proved too much for the government to take on, and the upgrades were revised downwards to a 20 billion yen ($160 million) maximum.

The government moved to privatise operations of the circle train last year, citing losses of over K1.5 million per day, and being unable to raise fares in the face of declining ridership.

Nothing more permanent than a temporary solution

In Yangon, busses continue to dominate daily commutes, with a YUTRA study finding half of residents using them for transport, followed distantly by bicycles, cars, taxis and others. As cars enter the city, though, bus routes have become more and more delayed, and bus drivers have to take extreme measures to collect customers and fares, often speeding and deviating from their set routes.

To bring order to the bus chaos, Bus Rapid Transit (BRT), in which bus lines are given exclusive road lanes and limited stops, has been proposed as a stop-gap measure until more durable solutions can be found.

According to Suzuki, BRT systems were intended as a short-term fix, to patch the city’s transportation needs for the next five to 10 years, but it is highly likely they will continue long beyond that.

Its implementation, though, has been fraught with delays and difficulties. The first line was announced to begin in November last year along Waizayandar Road, but even at inception, there were no set stops, and no exclusive lanes, making it less than a BRT.

Yangon remains dominated by small private bus lines, with 8,000 busses belonging to approximately 5,000 companies, many of whom have been less than willing to give up hegemony on the best bus lines to a BRT system.

YCDC has promised the formation of a public bus company, and that has since been limited to only certain routes, but even then, consensus remains difficult.

According to Suzuki, the government’s approach to traffic control has been mainly led using a hardware-oriented approach, where flyovers and bridges are used, rather than more responsive traffic lights or more intelligent routing.

This extends to one area of JICA’s plan that is likely to go ahead, an inner and outer ring road around Yangon which Suzuki claimed would be similar in design to Tokyo’s Gaikan Expressway. The inner ring road will pass through downtown, head east as far as South Okkalapa, extend above Inya Lake, and down along the west end of the Yangon. A larger outer ring road will surround the city over several bridges, passing through Thanhlyin the edge of Thilawa SEZ and into Dala. This will likely be an outer boundary for Yangon’s expansion and development.

Yangon is largely oriented north to south, and traveling eastward or westward across the city can be extraordinarily difficult. The ring roads and flyovers will largely ease this, but it will take some time for them to become operational, time in which roads will be restricted for construction.

Suzuki believes that the traffic situation will only get worse in the short term as more construction goes up, but with better public transport, Yangon could, “cope with the increasing population and traffic effectively and efficiently.”