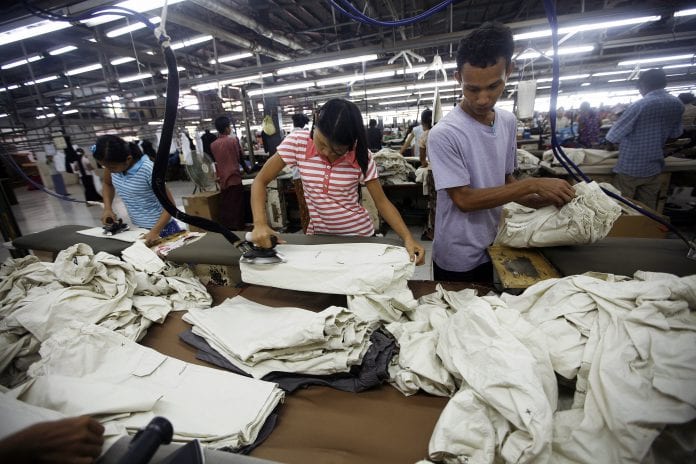 Deputy Union Minister for Labour, Employment and Social Security Daw Win Maw Tun pledged to improve labour rights in Myanmar, only days after the ministry sued companies for not giving employees the day off on July 19, a public holiday.

At a parliament session, Daw Win Maw Tun vowed to protect the rights of workers to receive overtime remunerations and other allowances within the legal framework.

“The ministry will act in accordance with the existing laws, by-laws and regulations to promote fairness between employers and employees,” she said.

Eight companies have been found violating the Holiday Law by asking employees to work on July 19, while two garment factories among them have already been prosecuted, according to U Win Shein, director general of the Directorate of Factories and General Labor Law Inspection.

The ministry has also sued five more factories for not abiding by relevant labour laws and regulations.

“We have sued the factories which required workers to work overtime or closed down without official approval,” said U Win Shein. “Outcomes of the trials depend solely on the respective judges,” he said.

The government has been conducting inspections on companies and factories in industrial parks for violations of labour rights. Companies caught violating the law are required to pay penalties. The government has also increasingly organised information seminars to promote labour law compliance and prevent forced labour.

However, many employers fail to observe the laws and regulations. For example, the law dictates the workday as eight hours, but some factories are overworking their workers.

“We, garment factory workers, have to work straight for a whole month without any day off. If we miss a day, we won’t get the bonus. This is the first time the government stands for the workers,” said Ko Min Min, a worker at a garment factory in Shwe Pauk Kan town.

A lawyer working on labour rights welcomed the government’s action. “I heard a long time ago that the companies overworking their labourers would be dealt with, but it didn’t happen in practice, so I had put in complaint letters.

“I support the actions being taken now. This will ensure employers follow the rules,” he said.

There have been cases where the decisions of arbitration bodies to prosecute employers or managers are seeing delays, highlighting the need to improve government regulations, he added.

“We can prevent labour unrest only if the law is reliable.”

The Holiday Law, enacted in 1951, was revised one day before the public holiday, also known as the Martyr’s Day.

According to the President’s Office website, the recent amendments specify the Holiday Law applies to all public and private sector businesses, clarifies the term “labourer” to include everyone who works for another person or company, but exempts those that are self employed or individuals who are family members working in their family’s business.

The updated law also specifies that employees serving as cooks, housekeepers, nannies, security guards or civil servants are not protected under the Holiday Law, but are governed under other labour laws. It states that public holidays that fall on a weekend, or other holidays announced by the government, are governed by the Holiday Law.

Companies that are unable to shut down can apply for a special permit from the government to operate on public holidays. If a permit is granted, the company must pay a premium wage.

The 1951 law imposes a penalty of up to 3-month jail term and a fine of K50,000 on violators. The ministry instructed that the employers found violating labour laws shall be warned for the first offence and shall be prosecuted for the second offence.

Days off in Myanmar include the public holidays announced by the union government every year in addition to weekends. Workers are entitled to a variety of paid times off including annual leave, medical leave and maternity leave.