HomeMMBIZ NewsGov’t to Offer Up to $5k to Fish Breeders; Eyes the Elusive...
MMBIZ News

Gov’t to Offer Up to $5k to Fish Breeders; Eyes the Elusive $700m from Exports 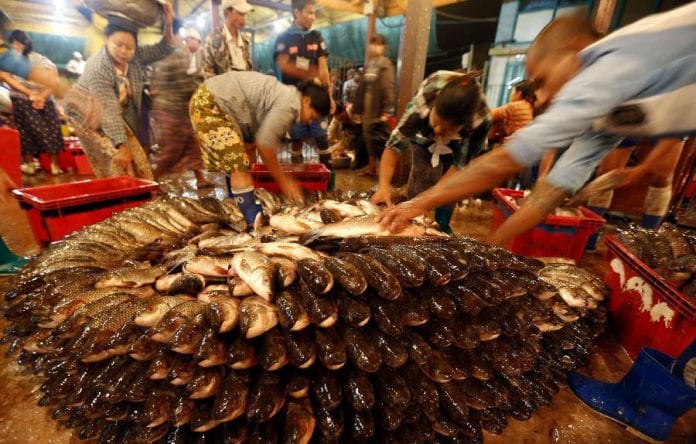 The government will offer loans of up to K5 million ($5,000) to breeders interested in entering the aquaculture industry in a bid to counteract the sliding domestic fishing industry and collapse in catch-sizes due to over fishing.

The loan can now be used to offset prohibitive costs of brick or soil for fish tanks, which cost upwards of K10 million, and is widely seen as an attempt to boost domestically farmed fish numbers.

The fall in salt and freshwater fish numbers, combined with issues in transportation and processing, has seen the fish export revenues to fall from a high of $650 million to $536 million in 2013-14.

This falls short of the $700 million target of fish exports from the Myanmar Fishery Federation (MFF).

“In 2006, we exported $700 million worth of fish but since then tonnage has fallen every year. This is because the amount we can catch at sea has fallen,” deputy chairman of the MFF, Daw Toe Nandar Tin, said.

“Our inland and maritime waters possess plentiful fish; however, we require high quality products for export and we currently don’t have that,” she said.

Breeders can obtain the loan through an application to the ministry with the interest and charges totaling K1.3 million ($1,300).

The new loans offered by the Myanmar government are expected to boost the country’s troubled fishing industry, shifting it towards managed catch farms.

The government also moved to protect the domestic fishing industry this year, banning all foreign-owned fishing vessels from its waters, in a bid to stop rampant illegal fishing.

This move may see domestic fish production increase; however, there remain further issues in the delivery of fresh or frozen fish from factories in Yangon’s industrial zones due to power outages.