Hanthawaddy Airport Construction to Start in 2016 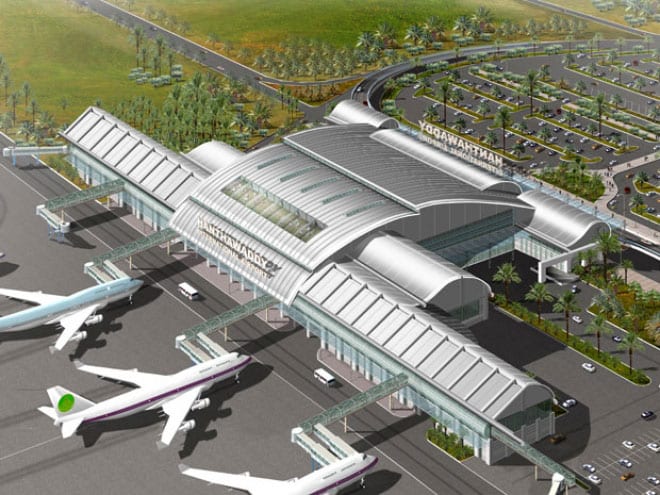 Construction of the Hanthawaddy International Airport in Bago is set to begin in 2016 and will be completed by 2020, a Department of Civil Aviation (DCA) official said.

The government’s project management committee entered into talks late last month with the consortium that won the bid to develop the 9,690-acre airport, about 70km from Yangon.

The group – comprising Singapore’s Changi Airport Planners and Engineers (CAPE), Yongnam Holdings and Japan’s JGC Corp – was invited to rebid for the project early last year after negotiations between the government and South Korea’s Incheon International Airport Corp, which was previously awarded the deal, broke down.

The first phase of the airport project is estimated to cost $1.5 billion, and will include a terminal complex that can handle 12 million passengers per year, runways that can land aircraft as large as Airbus 380s, air traffic control systems, and up to date communication equipment.

“The consortium will put up half of the cost of the project, while the Myanmar government will provide the rest. The government received half of the money through a 40-year loan from the Japanese government,” U Kyaw Soe said, director of DCA, said.

“When finished, the airport will become the largest and most modern airport in Myanmar. It will replace Yangon Mingalardon Airport as the primary gateway to Myanmar,” he added.

The upgrade projects are set to start on April 1, at the start of the 2015-16 fiscal year, U Nyan Tun, union minister for transportation, said earlier.

Land surveys are currently being conducted for the Hanthawaddy project while other surveys are being done by relevant departments to build highways and high-speed train lines to connect Yangon to the airport, according to DCA.

The second phase of the project will include a long-term plan to upgrade Hanthawaddy airport that will be able to handle 30 million passengers per year, DCA said.